See more on this story including video:  Watch As Liberal Astroturf at a Town Hall Come Unglued in Louisiana Over Prayer and the Pledge of Allegiance [VIDEO]

The audio, obtained by local radio station KPEL, reveals a coordinated effort to create the public impression that Cassidy’s support for Trump is unpopular with his constituents. The activists, who describe themselves as liberals in the audio, can be heard strategizing how to best turn a local town hall into a political victory. (RELATED: Democrats Behind Mexico City Demonstration Against Tillerson)

The activists split up into an “inside team” — tasked with occupying “as many seats as we can” and an “outside team,” whose job was to “give [the media] the coverage they want” before joining the others inside. Activists were instructed to dress like conservatives and leave at home “any signifier that you’re a liberal” in order to blend in with constituents.

The leftist activists strategized how best to “dominate” the question-and-answer section of the town hall and keep anyone “sympathetic” to Cassidy from asking a question.

The audio also reveals the activists laughing about “the poor people of Breaux Bridge” — local constituents — who might get stuck behind them. Local news coverage of the town hall said that “many attendees were turned away” from the town hall due to “capacity restrictions.” 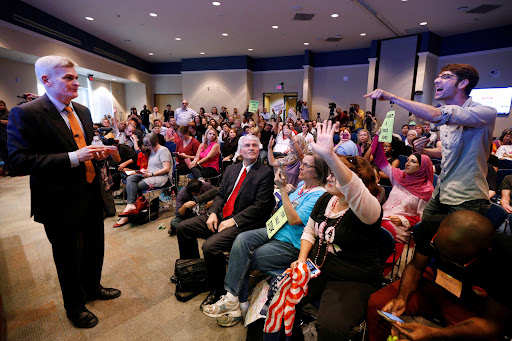 “Game plan number one is to fill as many seats as we can, right? If it’s all of us in there and the poor people of Breaux Bridge are sitting behind us, well then tough luck for them,” said one organizer, identified by KPEL as James Proctor. His “poor people” comment drew laughs from the other activists.

“If we can arrange it so he doesn’t hear one sympathetic question–great. That only magnifies our impact,” Proctor said.

KPEL identified Proctor as the leader of Indivisible Acadiana, a local branch of the national Indivisible organization, which has organized hostile Republican town halls all around the country. (RELATED: Anti-Trump Protesters To Begin Soliciting Tax-Deductible Donations)
“The Indivisible Guide does say that when you start to lose the meeting, that’s when you boo and hiss,” one unidentified activist can be heard saying. “Right, I was going to say that,” another activist replied. Local news outlet The Advertiser reported that members of the crowd “frequently interrupted, expressing disagreement with some of Cassidy’s positions and shouting out their own questions.”

One woman can be heard on the audio saying she was in contact with the national Indivisible organization. Indivisible Acadiana did not return an email seeking comment.

“The outside team will join the inside team in the hall after media coverage,” Proctor states at one point. “So what we’ll do is we’ll try to dominate enough, because–remember, the camera people especially are looking for some ‘b-roll’ and some quotes.”

“They’ve got three or four things to cover that day, this is just one of them,” Proctor said of media covering the town hall. “So we make sure we give them the coverage they want, and then everyone breaks and goes inside.”

Video from outside the event posted on YouTube shows protesters chanting, “Love not hate, that’s what makes America great.” One woman appears to be reading the chant from a script.

The activists can be heard in the audio referencing a partner group’s protest of Sen. Cassidy in Metairie, Louisiana, as a possible source of inspiration. Protesters at that event booed the name “Jesus” during the opening prayer.

Congressional Republicans have faced a wave of hostile town halls in recent weeks, due in part to the work of Indivisible and other leftist groups. (RELATED: Leader Of Portland Anti-Trump Protests Charged With Sexually Abusing Minor)

Secretary of State Rex Tillerson was the target of similar protest efforts while on a diplomatic visit to Mexico. Although on foreign soil, that protest was organized by Democrats Abroad Mexico — an official arm of the Democratic party.
This story has been updated with additional quotes from the audio and additional background information.