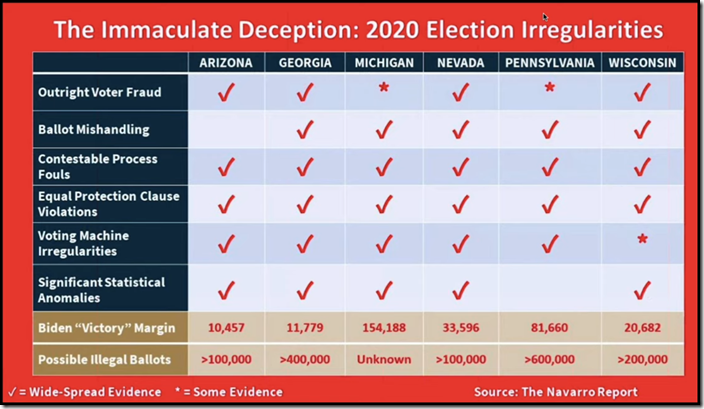 “I’ve literally read thousands of affidavits, I’ve read every single court case,” Navarro said. “I’ve looked at all the testimony that was done at the state legislature level and I can count on one hand the number of people who’ve done that in this country.”  He added, “The New York Times has the most power of any news organization in the world to do effectively a hard investigation of all of this. It simply has not done that . . . The knee-jerk reaction these days is to, if you’re on the left it’s like something that comes out that doesn’t fit your narrative, you knock it down.”

When asked by reporter Penny Starr from Breitbart News whether he thinks the report will change the outcome of the election, Navarro said that he hoped the report would “be a catalyst for a full investigation of all of these alleged election irregularities on a fast track and done before Inauguration Day.”

Sam Stein with The Daily Beast asked Navarro if the “political futures” of politicians like Georgia’s Republican Governor Brian Kemp should be “haunted” because of how they have handled electoral irregularities in their states. Navarro’s response was simply, “It should haunt this country.”

Navarro wrote the report as a private citizen because he believes that the piecemeal anecdotes and multiple lawsuits alleging election fraud failed to communicate a clear, centralized overview of the stunning evidence he has investigated. His goal was to prompt the media to explore with curiosity and to help the American people understand the gravity and scope of what has occurred. In short, he said it was a “theft by a thousand cuts across six dimensions and six battleground states rather than any one single silver-bullet election irregularity.”

Navarro believes there appears to have been a “coordinated strategy, effectively to stuff the ballot-box with Biden votes and at least some evidence of the destruction of Trump ballots.” He also points out that the number of votes being contested dwarfs the number of votes seen in the relatively thin Biden victory margin.

Navarro argues that the weight of the evidence provides more than an ample basis “to swing the election in favor of Donald Trump.” He looked at 50 lawsuits and judicial rulings, thousands of affidavits and declarations, testimony in a variety of state courts and legislatures, published analyses by think tanks and legal centers, videos and photos, public comments, and extensive press coverage.

Table 1 shows the seemingly insurmountable Trump leads on Nov. 3, which evaporated in the days following, eventually turning to Biden with razor-thin margins. It was an astonishing reversal of fortune for Trump, one that seems to defy credulity.

Table 2 indicates the widespread incidence of fraud in the six swing states. It also shows just how out of balance the Biden victory margin is compared with the massive numbers of ballots in question. With that kind of margin, a Trump victory could be very possible.

Ballot mishandling represents the second major dimension of alleged irregularities in the 2020 election. As seen in Table 4, it is a multifaceted issue.

In-person voting requires a higher standard of identification. There were also many chain- of-custody issues due, in part, to all the dropboxes. Ballot curing (the correction of mistakes) was also not standardized across jurisdictions. Equal protection was central to the Pennsylvania case brought forward by combat-veteran, Sean Parnell. His Petition for A Writ of Certiorari with Congressman Mike Kelly, is now waiting for an opinion from the Supreme Court of Pennsylvania.

Dominion Voting Systems machines and their SmartMatic software are central to this dimension of election fraud. There is mounting evidence reported by multiple experts on the alleged cyber-fraud in the 2020 election. UncoverDC has published several articles on the subject of cyber-fraud and lawyer Sidney Powell’s independent investigations have been at the forefront of those cases.

Georgia and Wisconsin show the highest number of statistical anomalies. Table 8 shows anomalies that are characterized by abnormal rejection rates, excessively high voter turnout (more ballots cast than registered or eligible voters—exceeding 100 percent in some cases), improbably high vote totals compared to historical data, and unusual vote surges early in the morning on Nov. 4 in all six states, after the vote counting had been halted for a number of hours. The counts were “unusually large in size with unusually high Biden-to-Trump ratios.”

It is important to note that while it is routine to see the rejection of mail-in-and absentee ballots in elections, in the 2020 election there were extraordinarily high numbers of mail-in ballots and Joe Biden received a disproportionately high percentage of those ballots.

Navarro maintains that the pandemic provided cover for the introduction of hastily made changes in procedures such as mass mail-in voting and the circumvention of state legislatures by other government officials in the changing of voting procedures and revisions of statutes. “They accomplished these statutory revisions through executive fiat or friendly lawsuits, thereby weakening ballot integrity,” explained Navarro.

He also contends that it is a dangerous game the media, politicians and the DOJ are playing. He said Barr “had no business making the statement he did” because it was premature. “If there are sufficient election irregularities and illegal votes to overturn the thin Biden margins in those battleground states, then America deserves a different outcome.”