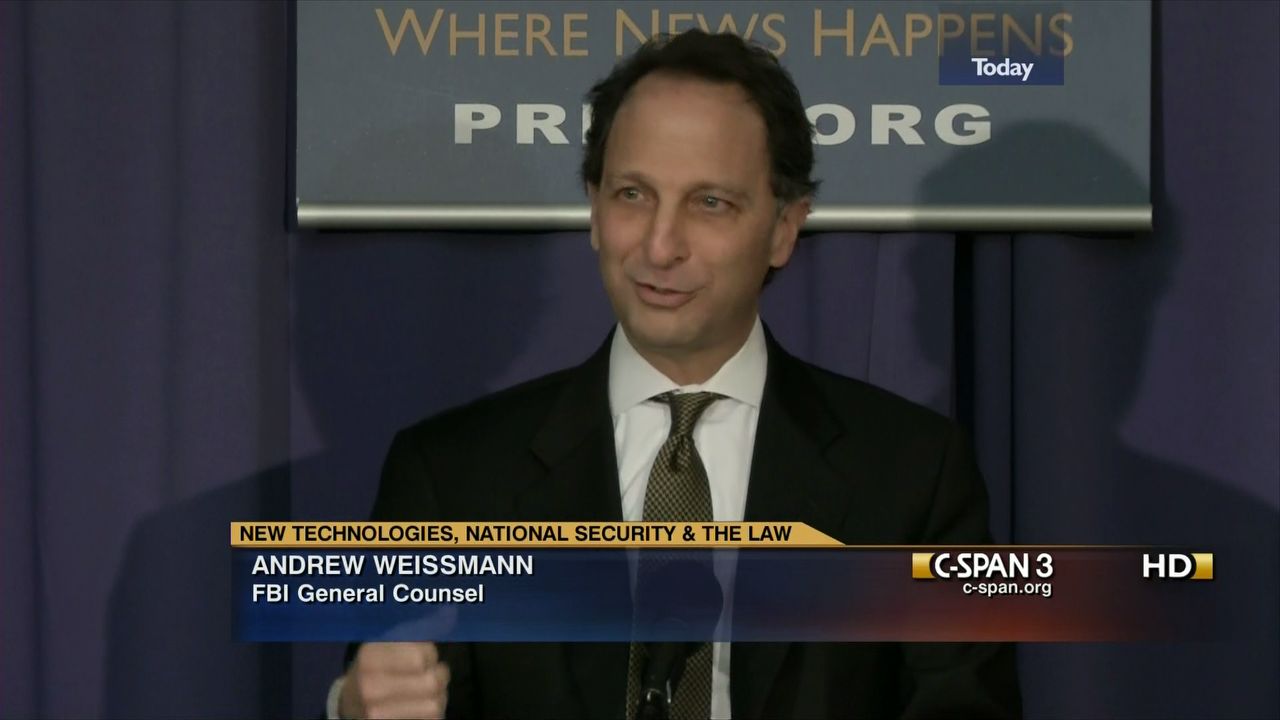 This is the best Robert Mueller could find in investigating the President of the United States?

With literally thousands of attorney's for Mueller to choose from, it is more than a little curious that he put together a team of Hillary supporters, including Peter Strzok at one point, as well as this Attorney who is also another financial supporter of Hillary Clinton and whose professional record is dubious at best.  -W.E.

The top attorney in Robert Mueller’s Special Counsel’s office was reported to the Department of Justice’s Inspector General by a lawyer representing whistleblowers for alleged “corrupt legal practices” more than a year before the 2016 presidential election and a decade before to the Senate Judiciary Committee , this reporter has learned.

In 2015 Weissmann was selected to run the Department of Justice’s criminal fraud section and was later handpicked by Mueller to join the ongoing Special Counsel’s Office investigation into the alleged obstruction and alleged collusion between Trump’s 2016 presidential campaign and Russia.

But Weissmann’s rise to the top was rocky from the start. Although he’s been described as a tough prosecutor by some, his involvement in a case targeting the Colombo crime family in a New York Eastern District Court was the first of many that would draw criticism from his peers, as well as judges.

Civil rights and criminal defense attorney David Schoen, was the lawyer who reported Weissmann. Schoen met with Inspector General Michael Horowitz and several FBI officials to discuss Weismann in 2015. Schoen, who says he has never been a member of a political party, told this reporter his concerns about Weissmann do not stem from politics but from Weissmann’s ‘egregious’ actions in previous cases. He became involved in Colombo crime cases more than 20 years ago after evidence revealed that the prosecution withheld exculpatory evidence in the case.

Schoen said he decided to revisit the case based on new witness information and “recent evidence that has come to light in the last several months.”

“The issue with Weissmann both pre-dates and transcends any of these current political issues,” said Schoen, who also used to represent the ACLU in Alabama. “I have met with Senator (Charles) Grassley’s staff and the DOJ IG about these issues and that was well before all of this…I care about these issues as a person who chose this profession and am otherwise very proud to be able to practice law, as the proud son of an FBI agent, and as a civil rights attorney dedicated to doing my part in trying to improve public institutions.”

John Lavinsky, a spokesman for the DOJ’s Office of Inspector General, declined to comment on Schoen’s meeting with Horowitz.

The FBI and The “Grim Reaper”

The case against the Colombo crime family in the late 1990s involved Theodore Persico, who was convicted of conspiracy to commit murder, loan sharking, racketeering and firearms charges. Persico was the brother of Colombo boss Carmine Persico, Jr, and the network was one of five major Italian mafia organizations operating out of New York.

Weissmann, who was a young Assistant U.S. Attorney with the Eastern District of New York, was the lead attorney in the case against Persico and described by those who knew him as ambitious.

The case against Persico wasn’t a slam dunk and would reveal how Weissmann, “would do anything for a conviction,” Schoen said.

Evidence suggested that Scarpa was involved in a personal relationship with his FBI handler, Lindley DeVecchio. DeVeccio, who was also a witness in a case connected to the Persico case. Weissmann had DeVecchio testify against Michael Sessa, a captain in the Colombo family, despite knowing DeVecchio was under investigation by the FBI for his relationship with Scarpa. Weissmann and his team failed disclose that to the courts and presented him as a solid witness in the case, according to Schoen and court documents.

There was also evidence that Scarpa received confidential information from DeVecchio that may have helped Scarpa “wage war” against another mafia faction, according to the 1998 appeal’s court documents. DeVecchio was eventually forced to retire from the FBI and was subsequently indicted for allegedly being involved in the four murders committed by Scarpa.

Those charges against DeVecchio were later dropped in 2007 due to lack of evidence, but the judge in DeVecchio’s case warned ‘the FBI was willing to make their own deal with the devil.” The judge was referring to the FBI’s use of Scarpa as an informant, according to reports. Scarpa was later convicted of the murders and died in a New York prison, as reported.

Persico and his co-defendants appealed their case in 1997, arguing that there was egregious Brady violations by Weissmann and the prosecution during their trial. “Brady” refers to the U.S. Supreme Court case Brady v. Maryland, in which the court held prosecutors are required to give the defendants evidence favorable to the defense.

A court memorandum and order, which has never been made public before it was obtained by this reporter, reveals that Chief Judge Charles P. Sifton, who presided over the case, reprimanded Weissmann for failing to disclose that Gregory Scarpa, Sr., a witness on behalf of the prosecution, was also working for years as an FBI informant. Scarpa’s moniker in the mafia underworld was ‘grim reaper’ and ‘Hannibal.’ He was accused of being connected to more than 100 gruesome murders related to his work for the Persico faction of the Colombo mafia crime family, reports stated.

Sifton denied the defendants’ the extraordinary relief of dismissing the case, but he singled out Weissmann for withholding information. The judge described then AUSA Weissmann’s conduct as the “myopic withholding of information” and “reprehensible and subject, perhaps, to appropriate disciplinary measures,” according to the opinion obtained by this reporter.

Sifton’s suggestion that Weissmann is brought before a disciplinary board never came to fruition.
Powerful allies came to his defense. In fact, then U.S. Attorney Eastern District of New York Zachary Carter fought to remove Weissmann’s name from the memorandum and order. Carter wrote a letter to Judge Sifton on Feb. 21, 1997, “to request that you amend your memorandum and order dated Feb.18, 1997 in the above-captioned case to delete the name of AUSA Andrew Weissmann from the sentence which it appears on page 46 of the opinion.”

Carter went on to say, “while the court has determined that the failure to make the disclosure was an error, the nondisclosure cannot fairly be characterized as the kind of egregious misconduct that warrants castigating an attorney by name in a published judicial opinion.”

“Sifton complies and withdraws the order that singles out Weissmann and issues a replacement order that does not mention Weissman’s name,” said Schoen. “I have never ever seen such a thing.”

Schoen said the failure to hold Weissmann accountable for his actions in the Persico case “began the process, it seems, of leading Weissmann to believe that he has a license to act without regard to the bounds of the rules of ethics or pursuant to the prosecutor’s oath to seek justice.”

An appeals court’s ruling in the Persico trial reflects the significance of the breach made by Weissmann and the other prosecutors in the case. Persico and his four co-defendants asked for a new trial, and while Persico’s was denied, his co-defendants were granted the right to a new trial, according to court records.

Sifton stated in his ruling, after reviewing the evidence “released by the government, my confidence in the verdict of guilty on these counts is substantially undermined, and a new trial is ordered as to these defendants.”

Peter Carr, a spokesman for the Special Counsel’s Office, noted that the “2nd Circuit and the appeals court concluded that the impeachment evidence withheld by the government does not meet the Brady standard of ‘materiality.’”

Sidney Powell, an appeals lawyer in Dallas, who successfully challenged Weissmann’s task force in the Justice Department during the Enron case disagreed stating, “the appellate court, loathe to reverse a criminal conviction for misconduct of the prosecutor, substituted itself for the jury and rationalized that the defense really couldn’t have done much with the withheld information.”

Powell is describing the appeals court decision, which stated, “evidence that Scarpa lied to the FBI about murders he committed provides little direct support for the conclusion that he also lied to his own co-conspirators about who was responsible for the murders…”

Schoen also disagrees with Carr’s explanation from the Special Counsel’s Office, saying it is disingenuous: “Anyone from DOJ in any way familiar with this series of cases knows that every single defendant from that point forward– and there were many– was acquitted when the evidence Weissmann withheld before Sifton was disclosed at trial.”

The judge who handled many of the cases ruled that the jury should be told and many of the “defendants were found not guilty.  So, for DOJ to claim this was cumulative or material to the defense is really unfair and misleading,” stated Schoen.

“The FBI had to redo their whole guidelines on the use of informants over this,” said Schoen. “Weissmann and crew did not just withhold evidence.  They actively allowed a mafia killer to remain on the street killing.”

This new information on Weissmann’s alleged past conduct may shed light on National Review author and attorney Andrew McCarthy’s recent article revealing why the new judge in Michael T. Flynn’s case Judge Emmet G. Sullivan filed “an order directing Mueller to provide Flynn with any evidence in the special counsel’s possession that is favorable to Flynn, whether on the issue of guilt or sentencing.”