Kim Jong-un threatens to turn US into ‘sea of flames’ with surprise attack, boasts America’s fate is in his hands 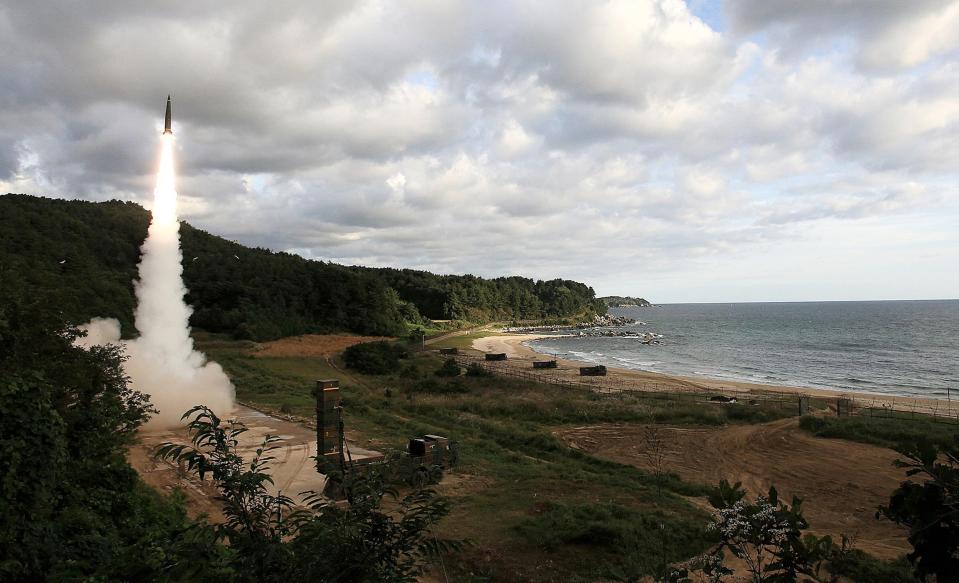 
TYRANT dictator Kim Jong-un has taunted Donald Trump boasting "America's fate is in hands of North Korea" by vowing to turn US into a "sea of flames".

The threat came just a day after the North carried out yet another successful ballistic missile over Japan claiming America is now in "mortal fear" after proving it has the military power to strike US territory.
A spokesman for NK's ruling party said: "Through the two successful ICBM test-launches the DPRK has put the whole U.S. mainland in its striking range and clearly showed that it can turn the American empire into a sea in flames through sudden surprise attack from any region and area.
"Whatever means and methods the U.S. may employ, they will never work on the DPRK. The U.S. fate is in the hands of the DPRK.

"If the US and south Korean warmongers persist in reckless action in disregard of our repeated warnings, we will decisively take a strong retaliatory step."

Meanwhile, an editorial run in one of Korea's state-run newspapers described the US as a "war merchant living on human blood," while the official newspaper said the US "would meet horrible nuclear strike and miserable and final ruin" in the event of an attack.

Footage released on North Korean TV yesterday captured the launch of an intermediate range Hwasong-12 which is capable of reaching the US island of Guam.

Images of the Kim Jong-un were released showing him gleefully watching the missile test.
The brash North Korean tyrant boasted of his "shining victory" and vowed that his final goal is "equilibrium of real force with US".
The missile was the second to be sent over Japan by the hermit state in less than a month and the 19th test this year, according to Seoul.

After the launch, the South Korean military also carried out a live tank fire exercise along the Demilitarized Zone (DMZ) in Paju.

South Korea’s president has said the country possesses the power to destroy its northern neighbour “beyond recovery."

Moon Jae-in also said dialogue with the Kim was “impossible in a situation like this”, South Korea’s Yonhap news agency reported.

Mr Moon said: “In case North Korea undertakes provocations against us or our ally, we have the power to destroy [them] beyond recovery.

“Dialogue is impossible in a situation like this. International sanctions and pressure will further tighten to force North Korea to choose no other option but to step forward on the path to genuine dialogue.”
He added the country's military had been ordered "to prepare a stern measure that can effectively counter North Korea's increasing nuclear and military threats."

Mr Abe said: “The international community should unite against such conduct to send a clear message … The recent sanctions and resolutions must be fully complied with and implemented. That is now ever more clear.

“If North Korea continues to walk this road, there will be no bright future. We need to get North Korea to understand that."

But Mr Suga said there's no evidence of any missile fragments landing on Japanese territory.

The US military said the missile did not pose a threat to its territory of Guam.

U.S. Defense Secretary Jim Mattis branded North Korea 'reckless' after the launch.
Asked about a possible American military response, Mattis said, "I don't want to talk on that yet." after he said that the missile launch had "put millions of Japanese in duck and cover."

Foreign Secretary Boris Johnson said: "North Korea has conducted yet another illegal missile launch.
"The UK and the international community have condemned the aggressive and illegal actions of the North Korean regime, and the succession of missile and nuclear tests.
"We stand firmly by Japan and our other international partners.
"We are working to mobilise world opinion with the aim of achieving a diplomatic solution to the situation on the Korean peninsula.
"This week the most stringent UN sanctions regime placed on any nation in the 21st century was imposed on North Korea, after being unanimously agreed at the UN Security Council.
"These measures now need to be robustly enforced. We urge all states to play their part in changing the course North Korea is taking."

Australian Prime Minister Malcolm Turnbull was also quick to condemn the launch.
"This is another dangerous, reckless, criminal act by the North Korean regime, threatening the stability of the region and the world and we condemn it, utterly," he said in an interview with Sky News.

"This is a sign, I believe, of their frustration at the increased sanctions on North Korea, recently imposed by the Security Council. It's a sign that the sanctions are working."
Mr Turnbull later fronted the media, where he addressed whether further sanctions would increase the risk of attack on Japan.

"I don't accept that. The critical thing is to continue to apply economic pressure on North Korea to bring the regime to it senses," he said.

"Nobody wants to see a war on the Korean Peninsula. If Kim Jong-un were to start a war, to attack the United States or one of its allies, he would be signing a suicide note.