On The Precipice Of World War III: Russia Prepares For War On Multiple Fronts 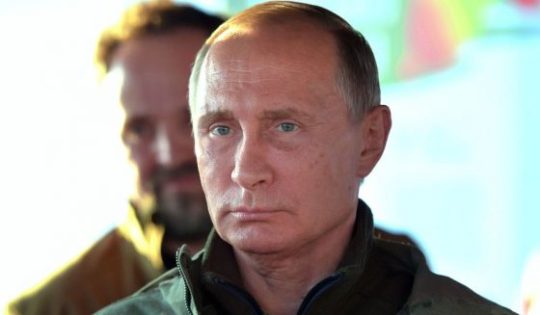 Things are quickly spiraling out of control for the US.

The Yuan has basically become the reserve currency now. Russia will now head the UN Security Council. And my favorite… Obama has handed the Internet to foreign entities comprised of our enemies… the Russians, Chinese and Iranians. Good times.

But the last couple of days have been REALLY interesting and not in a good way. It all revolves around Russia pretty much and their moves towards World War III. We have been in the beginning phases of the war for a number of years. The opening salvos have taken the form of intrusive cyber attacks. But a hot war is coming… I no longer have any doubt of that whatsoever. 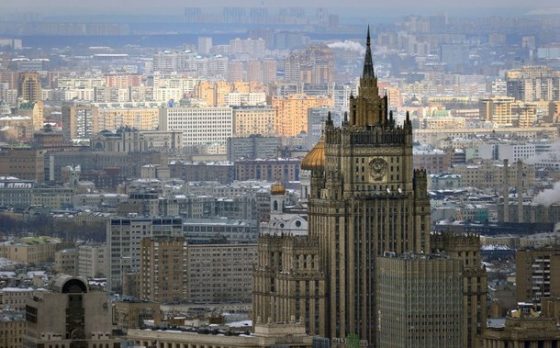 Let’s start with Russia suspending diplomacy with the US over the conflict in Syria. Not good. The US has announced they are ending diplomatic engagement with Russia and are ‘reviewing’ our military options over the Aleppo boondoggle. We don’t seem to get it. Russia and Iran now own Syria. Whatever we do there now won’t be very effective. Russia has Tartus and now essentially the rest of Syria is being handed to Iran. Russia is prepping an offensive to gain ground in the Baltics and the Ukraine… and even further conquests are on the drawing board.

Earlier today the UN warned Russia on their bombing of Aleppo. That doesn’t matter at all to Russia… in fact, they are stepping up their bombing with bunker busters. They want to kill everyone and wipe them off the proverbial map. If we send troops into Syria, Putin is sure to do the same and it will be game on. We are now considering airstrikes on Syria as I write this. Top military leaders say this could very well lead to war with Russia… we are already there boys.

But wait… there’s more. Moscow announced yesterday that it was ending cooperation with the US on a 16 year-old program for the disposal of weapons-grade plutonium to curb the production of more nuclear bombs. Kerry’s ceasefire in Syria was a monstrous joke. In fact, he played right into Russia’s hands. What a tool. A 10 year-old would be better at military strategy than these fools.

Next, Russia has deployed an anti-missile system in Syria for the first time, potentially as a means for the Assad government to counter US and allied cruise missile attacks. That should end well. Yeah baby. Components of the SA-23 Gladiator anti-missile and anti-aircraft system, which has a range of roughly 150 miles, arrived over the weekend “on the docks” of a Russian naval base along Syria’s Mediterranean coastal city of Tartus.

I especially thought this quote from Fox News was appropriate:

While the purpose is not clear, one US official asked sarcastically, “Nusra doesn’t have an air force do they?” speaking about the Al Qaeda-linked group in Syria. The Islamic State also does not fly any manned aircraft or possess cruise missiles, in a sign that Russia is directing its actions to protect itself against any potential attack from the United States or its allies.

Today, the Russian embassy in Damascus was shelled from an alleged terrorist-controlled area of Syria. Guess who Russia is blaming? That’s right… the US. Tick freaking tock goes the war clock. Nobody was injured, but that just ticked the Russians off. Convenient.

We already know that Russia and Iran – two arms of the New Axis of Evil are in Syria – well, here comes the third one… China. Beijing and Damascus have agreed that the Chinese military will have closer ties with Syria and provide humanitarian aid to the civil war torn nation, a high-ranking People’s Liberation Army officer said, adding that the training of Syrian personnel by Chinese instructors has also been discussed, according to Xinhua. This is a clear sign that Russia, China and Iran are aligning against the US. I hate to say I told you so, but I’ve been saying this was coming for years now. China has previously praised Russia’s involvement in Syria. 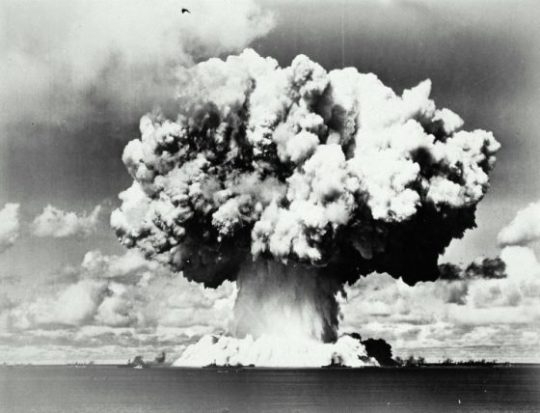 Last, but certainly not least… Russia is holding a massive evacuation drill for more than 40 million people to prepare for nuclear war. More than 200,000 emergency services personnel and soldiers will use 50,000 pieces of equipment during the massive civil defense exercise. Management bodies and forces of the Emergency Ministry’s territorial bodies have been put on simulated high alert. Representatives of federal executive authorities, heads of regions, local governments and organizations are taking part in the massive drill. Emergency Ministry’s forces and facilities are fully engaged, including rescue military divisions, rescue units, paramilitary mine rescue units and State Small Vessels Inspectorate, fire departments and aircraft. It has already been widely reported that Russia has been busy building nuclear bunkers all over Moscow. I assume in actuality, it has been all over Russia.

Russia’s western missile forces are testing their battle readiness by practicing fire and preemptive strikes on crucial enemy infrastructure, state news agency Itar-Tass reported. The missile brigade in Leningrad region, which surrounds St. Petersburg and borders Estonia, as well as Finland, is on high alert as a part of combat-readiness drills, testing the unit’s preparation. It is conducting fire against a “simulated enemy” from short range Iskander missiles systems. Some of the 500 troops drafted to the regional drill will also practice camouflage, biological and chemical defense of troops in the field and counter-reconnaissance.

As recently as last year, Russia conducted a simulated nuclear hit on an area the size of Sweden. I’m sure that was no accident.

This is a classic preamble to war. Russia is heightening fears of a nuclear confrontation. They have set the US up as the fall guy. Now they are making a very public display of prepping Russians for World War III. Don’t get me wrong… World War III has already started, I just don’t think nuclear bombs are on the table… yet anyway. The war is far more likely to be a massive debilitating cyber war to begin with, but there will be hot elements on the ground as well. 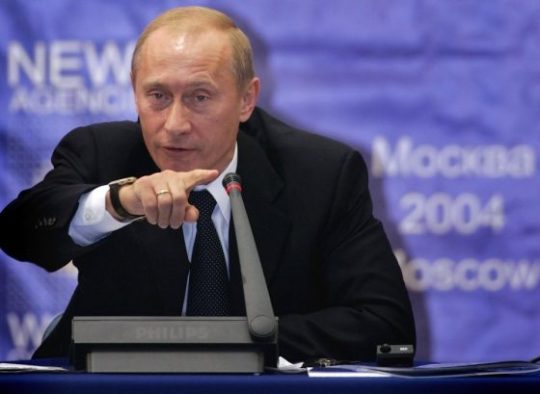 Today’s exercise is being run by EMERCOM, Russia’s Emergencies Ministry. It will go on for four days. Civil Defense Department Director Oleg Manuilov told Interfax: “Training will be held from October 4 to 7 and will be attended by more than 40 million people, more than 200 thousand professionals rescue units and 50 thousand pieces of equipment.”


Russia is spreading this fear mongering throughout their media outlets and official statements. One headline on the website Zvezda last week read “Schizophrenics from America are sharpening nuclear weapons for Moscow” – claiming the US wanted to punish Russia over challenges in the Middle East.

EMERCOM announced on Friday that underground shelters which could fit the entire population of Moscow – 12 million – if war broke out were ready and waiting. 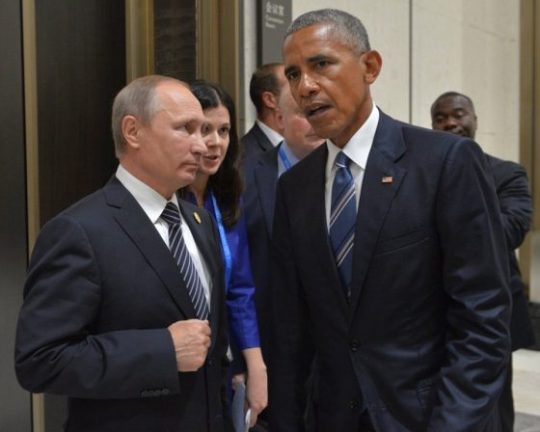 Russia currently has the largest stockpile of nuclear weapons with 8,400 and a section of its nuclear doctrine which allows for use of the weapons if there is a vague suggestion of a threat. America has 7,500 warheads, considerably less and those are pretty much outdated. In the past, Dmitry Kiselyov, head of Russia’s main news agency, has said only Russia would be able to turn the US into “radioactive ash.” And you know who is egging all of this on? Alexander Dugin of course. This fits his apocalyptic view of warfare rather nicely.

Putin has invested heavily in decking out top secret facilities around Moscow in the event of war. He has even ordered the building of a 400-square mile facility in the remote wasteland of the Ural mountains from where any future conflict could be directed. Satellite images reveal the location of the huge center near Mount Yamantau.

Russia, China and Iran are actively preparing for war with the United States and soon. You have to wonder why they are prepping their people and we aren’t ours. Russia must be overjoyed at that. Time is running out to stop the Russians and they know it. I fear we have already fallen off the precipice of World War III.
Email Post
Labels: Putin Russia signs of the times WWIII