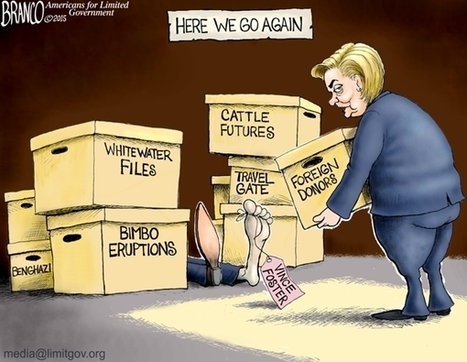 Today, New York Times Bestselling author Ed Klein has revealed on The Sean Hannity Show that sources have confirmed to him that not only is The Clinton Foundation under federal investigation, but also at least one Clinton Foundation insider is prepared to testify in a court of law against Hillary.


Reports of legal troubles for the foundation began last week when The Daily Caller reported that a joint FBI-US Attorney probe of The Clinton Foundation is currently underway. The charge is supported by a number of emails recently released by Judicial Watch, which suggest The Clinton Foundation engaged in pay-for-play while Hillary Clinton was Secretary of State.

"We are a long way from Hillary Clinton sliding into The White House without having some real serious legal problems before this election," Klein told Hannity.
During his interview, Klein, author of the forthcoming book Guilty As Sin, dropped a number of bombshells:


- Klein confirmed that the ongoing investigation is being led by Preet Bharara, U.S. Attorney for the Southern District of New York. Although he was appointed by Barack Obama, Bharara is known as a hard-nosed attorney--and has the track record to prove it. Bharara has successfully prosecuted dozens of Wall Street Executives and powerful politicians, including former New York's Democratic Assembly Speaker Sheldon Silver, who was sent to prison for 12 years on federal corruption charges.

Bharara is reportedly working with the Federal Bureau of Investigation and two other District Attorneys, one in Little Rock, Arkansas, and another in Washington D.C.

"This investigation, I would say, is hotter than ever," Klein told Sean. Klein added that FBI Director James Comey may be seeking to "redeem himself" with a public corruption charge against Hillary after he failed to recommend indictment for her mishandling of classified information.

- According to Klein, Comey and Bharara have been in contact for months on the subject of Hillary Clinton's public corruption with the Clinton Foundation while she was Secretary of State.

- Sources have confirmed to Klein that Bharara has lined up several witnesses who are willing to testify. According to Klein, at least one of those sources used to work for the Clinton Foundation, and would have first-hand knowledge of any pay-to-play which occurred.

"Your sources are telling you that witnesses were said to be willing to testify that this was a quid pro quo--in other words that she sold access to her office?" Sean asked.
"That's my understanding from my sourcing," Klein responded.

- Klein also claims to have spoken to three State Department employees that worked closely with Hillary Clinton while she was Secretary of State, who personally witnessed her dealing with State Department business.

"They actually overheard her talking on the phone to a donor," Klein explained. If true, Clinton's actions would be a violation of a "memorandum of understanding" she signed prior to taking office, in which she promised to the Obama administration that she would not to engage in business connected to the foundation.

"I'm not predicting this is going to happen," Klein concluded. "All I'm saying is that the heat is on right now. Whether or not it's going to flame into a real serious law case, who knows. Will Preet Bharara do the right thing? I hope so."