EMP ATTACK ON AMERICA IS AN IMMINENT THREAT (VIDEO)

HOW IMMINENT? HOW ABOUT ANY SECOND IMMINENT?
I FEAR FOR MY NATION.
Of all the existential threats we face, there is nothing more deadly serious than an attack against America via an electromagnetic pulse or EMP, perpetrated against America by one of our many sworn enemies.
Who would love nothing better than to render us helpless while they attack Israel than for instance Iran?  Can we not imagine, especially in light of what is happening in the world today for Russia or China or possibly both teaming up to seize America?  Can you not envision Barack Obama planning on serving us up on a silver platter. Is this why Obama has passed so many executive orders centered around Martial Law and our government purchasing enough ammo to quell a war inside of America? Regardless, the technology is available today to protect our grid from such a threat and there is no excuse why we are not. Something is seriously wrong and I refuse to chalk it up to bureaucracy.
This should concern every American, liberal or conservative, black or white, rich or poor.

Earlier this week I had a chance to listen to an interview with Cynthia Ayers that honestly chilled me to the bone.
Cynthia Ayers knows what she is talking about and is considered a National security expert. Ayers is currently Deputy to the Executive Director of the Task Force on National and Homeland Security and a member of the EMP Coalition. She formerly served as Vice President of EMPact Amercia after having retired from the National Security Agency with over 38 years of federal service — a period that included 8 years at the U.S. Army War College’s Center for Strategic Leadership. 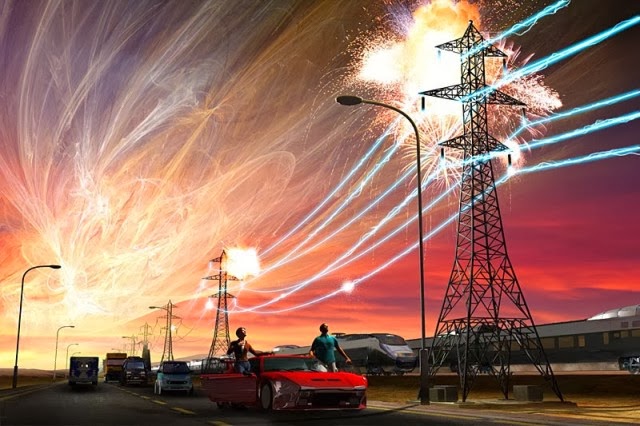 Here is part of the interview between host Rick Wiles and Cynthia Ayers:

RW: What are we talking about when we say an EMP attack?

CA: Well an electromagnetic pulse attack, very basically it can be generated using a high altitude nuclear blast.  It could be kiloton size or megaton size anywhere from I believe 30 kilometers above the earths surface to about 500 kilometers, um, 300 miles. Interestingly just to throw this in 300 miles above the earths surface over the eastern half of the United States is where North Korea now has a satellite that is supposedly tumbling out of control, um, back and forth across the eastern half United States and a satellite can hold a small nuclear weapon of just the right size for an advanced EMP weapon.

EMP is essentially highly charged particles that interact with the atmosphere to, um, in affect it literally melts transformers it destroys electronics it would essentially take us back to
the 1800's and possibly even the 1600's if we were hit with an EMP and that's because we would lose
communications, transportation, all electronics, obviously heating and anything in your house that has like electronics, the food supply and virtually anything that depends on electricity which is it just about everything in our modern day society.  We would become a very localized society, it would be  little communities taking care of themselves if they can't do that without being overrun by hordes looking for food, and it would be essentially hell on earth.

RW: It sounds like a Mad Max movie to me.

CW: It could very well be.  A lot of people may be familiar with the TV show that's going on now "Revolution" which takes it a little bit to the extreme in the sci-fi realm I think but in terms

of war lords and things like that it's it's not so far out of the question.

RW: Well you know a lot of Americans when you tell them about the potential of an EMP attack their first response is well if it happens you know we'll fix it we're America.  Tell us why that won't be possible.

CW:  Well mainly because of the transformers that are used, they are the critical part of our electronic grid.  We have almost two thousand of these across the U.S., I think sixteen hundred or more anyway.  The core of the critical infrastructure is made up of about 350- 360 large building size transformers.  Each one of these has hundreds of thousands of people depending on their continued operation to get their electricity. Well these things are only made in two countries overseas, we don't make them. These are the great big ones.  It takes about eighteen months to two years generally to make them, each one of them is unique so having spares, and they are millions and millions of dollars, having spares is virtually impossible, they are re-made by having people come over from these foreign countries and um, program, essentially re-program how to make them.  They are each unique and each one of them has specific, uh, specifications that have to be re-done and they are hand-wired overseas so it takes, you can figure eighteen months to two years for each one.  I understand that they can only really do one or two at a time, um, and if we were to lose 350 of these things or virtually the entire core it would take a long, long time. The National Academy of Sciences came up with an estimate of 4 to 10 years that we would be without electricity if this were to happen.  They say this is a conservative estimate and so does the EMP Commission mainly because if we lose them through for instance a great geo-magnetic storm which is another possibility that I haven't discussed yet, other countries would probably be affected if we were to lose that many.  But if we were to lose them through an EMP attack then there is probably a lot of other things going on in the world that will take other countries attention away from helping us.

RW: Which countries are the leaders in producing these units?

CW:  As I remember, Germany and South Korea.  There could be other countries that are ramping up for this, but I don't know, I haven't really been keeping up with that particular aspect.
RW: Okay, but they could have problems of their own during a crisis like this.

CW: Or it could just be to their interest not to intervene.  As a matter fact I wrote this scenario where an EMP was used against us Iran during the Ahmadinejad "reign", so to speak, as a first strike option

and first strike being first strike in a global war or simply against the west where the West itself
could be taken down in less than a half a day.
RW: So Germany and South Korea could be threatened "if you assist the United States in its recovery you're going to get a dose of the same medicine"?
CW: Right, right are and they may have already gotten a dose by that time anyway.

Hope that caught your attention, if not, absorb these estimates from Ayers:
"The EMP Commission noted that conservatively 66% or two thirds of our population would be gone within 365 days from things like exposure to climate problems and starvation and chaos, etc.  But one of the EMP Commission members noted it would be more like 90%.

How the globalists would rejoice in decimating a large part of the American population...a population that they see as destructive to the land, while simultaneously preserving the land itself.  I understand that we have submarines around the globe armed with nuclear warheads and so we would still be a great threat militarily and have some protection.  But there would be little or no need for a nation to attack us, as time, a very short amount of time would see our population die-off significantly.  How loud would the cries be for help, any help and at any cost?
In the meantime, what is today's Congress doing to protect ourselves from this imminent threat?

There is a bill before Congress introduced in June of 2013 called the "Shield" act, this needs to pass TODAY.  The world is getting no less dangerous and an attack on America of this kind could come at anytime.  Nine months in Congress is simply ridiculous.  Nine days is too long.

You can take a look at this bill here:
SHIELD Act (PDF)
RESOLUTION EMP(PDF)
I want to encourage readers to go to ShieldAct.com for more information on this legislation and how you can get involved to put pressure on lawmakers to pass this law today.