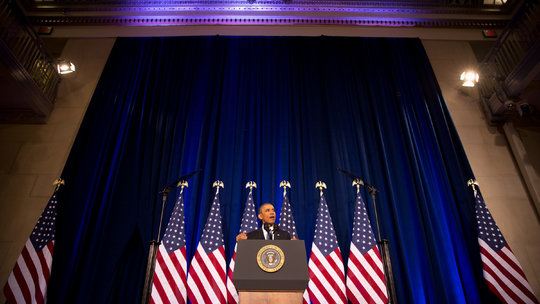 
“At the dawn of our Republic, a small, secret surveillance committee, born out of the Sons of Liberty, was established in Boston. And the group’s members included Paul Revere. At night, they would patrol the streets, reporting any signs that the British were preparing raids against America’s early Patriots. Throughout American history, intelligence has helped secure our country and our freedoms.”


It is hard to believe that some speechwriter could so shamelessly coopt the fight for liberty to justify the modern surveillance state. On the other hand, given the progressive education that the majority of our citizens have been brainwashed to believe maybe he thought nobody would notice. What do you say we shed the light of TRUTH on this mind-manipulating rewrite of American history?


The Sons Of Liberty Were Birthed By Colonists Who Were Fed Up With The Government’s Intrusion Upon Their Privacy, Property And Denial Of Their Rights


It all began in February 1761 when James Otis, Jr., a former government attorney, brought a lawsuit against the government for its blatant violations of the colonists’ rights to privacy and security of property from warrantless searches and seizures. Otis blew the cover off the British tool called “Writs of Assistance.” These Writs were authority given to government agents, by law, that permitted these agents to arbitrarily demand access to colonists’ homes and businesses to search and seized anything the government agents determined to be suspicious.

Otis had been in charge of the execution of these warrantless searches and prosecutions that resulted from the seizures. He began to realize just how tyrannical these Writs were.   He called them, “The worst instruments of arbitrary power, the most destructive of English Liberty ever found in an English law book.” When Otis was approached by some colonists who were victims of this arbitrary power, he decided to resign his post and take up a legal battle to secure the Liberty of the Colonists.


The Colonists had a long established right to the security of their property and to due process rights. Otis was there to defend them.


Otis argued for five hours, fighting the government in their courtroom. He lost the legal fight but birthed a spirit of independence in the hearts and minds of the colonists. This is what John Adams said about that day in court.


“But Otis was a flame of fire! With a promptitude of classical allusions, a depth of research, a rapid summary of historical events and dates, a profusion of legal authorities, a prophetic glare of his eyes into (the future), and a rapid torrent of impetuous eloquence, he hurried away all before him…American Independence was then and there born. The seeds of Patriots and Heroes – to defend the vigorous youth, were then and there sown. Every man of an immense, crowded audience, appeared to me to go away, as I did, ready to take up arms against Writs of Assistance. Then, and there, was the first scene of the first act of opposition to the arbitrary claims of Great Britain – then and there, the child of Independence was born. In fifteen years, namely in 1776, he grew up to man hood, and declared himself free.” (John Adams to William Tudor 29 March 1817);


Also in that courtroom that day were Samuel Adams and many of the other men who would become the founders of our Constitutional Republic. Sam Adams left that courtroom inspired to form the Committees of Correspondence, a citizen coalition group whose purpose was to connect the Liberty minded Colonists and help educate each other on the TRUTH in the face of government media propaganda.


The Sons of Liberty were the action group birthed out of the inspired members of the Committees of Correspondence.


The Sons Of Liberty Were Not A Government Surveillance Program


As a matter of fact, they were quite the opposite. The Sons of Liberty held rallies and protests against the government’s denial of their rights to privacy and due process. The protests took the form of mock hangings and mock funeral processions of government agents.   They were engaged in ANTI-GOVERNMENT surveillance defending Liberty from a government who was refusing to abide by their Constitutional Charters.


If the progressives can rewrite our history to the point where Patriots fighting for Liberty become the very government oppressors they battled, we will become enslaved and never even know it. I am reminded of what Thomas Paine said about THEIR King in his dissertation called, “Common Sense”:


“He may accomplish by craft and subtlety in the long run, what he cannot do by force or violence in the short one.”


This blatant distortion of reality has only one purpose – To convince the masses to submit to a level of government control that can only be equated to tyrannical Kings and Kingdoms. Our founders did not accept such tyrannical abuse of their God-given rights and we do should not accept it now.


"I will to my dying day oppose, with all the powers and faculties God has given me, all the instruments of slavery on the one hand and villainy on the other as this Writs of Assistance is."  James Otis, Jr.


What is the difference between this history and Obama’s? This one is based in fact and Obama’s is purely fiction.


Spread The TRUTH – Revive The American Spirit Of Liberty And Independence!