Why Is Homeland Security Taking Control of Local Police? 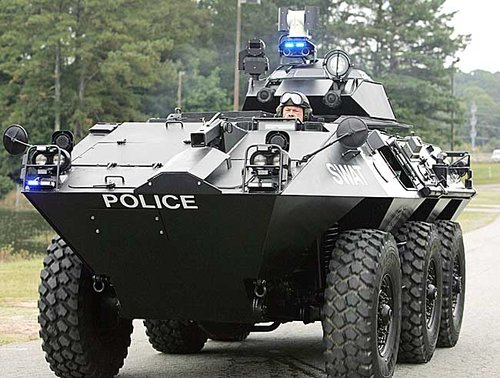 A key plank of the Obama administration platform seems to be the conversion of the local police into a fifth branch of the U.S. armed forces.
The means of accomplishing this goal is the doling out of millions of dollars from the Department of Homeland Security (DHS) to police departments and sheriffs' offices around the country.
Cash-strapped local law enforcement gobbles up the federal “grants,” purchasing military-grade vehicles, weapons, ammunition, and surveillance technology that would make the National Security Agency (NSA) proud.
For a list of the largesse and an inventory of the incredible equipment it finances, we rely on local media reports.
The Journal News from Albany, New York reports:

The San Juan Police Department has added a robot named Raven to its crime fighting arsenal.
Raven was purchased in early November at a cost of $27,000, paid for with a grant from the Department of Homeland Security, said San Juan police Chief Juan Gonzalez.
“Raven is a great asset to our department,” Gonzalez said, referring to the black, shin-high, tank-like robot designed to enter hard-to-reach places. “He is equipped with a set of cameras, infrared cameras and audio equipment that gives us eyes and ears in difficult situations such as a hostage situation.”
While Raven has already been used to gather intelligence in a drug raid last month, San Juan police got a chance to fully interact with the robot in the days before Thanksgiving when the department ran a series of exercises to test the capabilities of Raven and of the Law Enforcement Emergency Regional Response Team, or LEERRT — the regional SWAT team based in San Juan.
The San Juan Police Department’s website looks more like an advertisement for an elite military unit rather than for the cops from a town of less than 36,000.
Apart from armored personnel vehicles and war-worthy weapons, perhaps the most popular item purchased with DHS grant money is facial recognition software.
San Diego State University’s Police Department is the proud new owner of this powerful surveillance technology. The school’s newspaper The Daily Aztec reports:

Facial recognition technology, previously limited to soldiers in Afghanistan and FBI agents, is now being used by civilian law enforcement agencies throughout San Diego County. According to documents acquired by the Electronic Frontier Foundation, a nonprofit focused on digital and privacy rights, the San Diego State Police Department is one of the agencies using this new technology. SDSUPD currently only has one officer in the program. However, he is the most active officer in the county, with more than 200 photos analyzed from January to October of this year.
The program to bring facial recognition technology to San Diego law enforcement is called TACIDS—short for Tactical Identification System. It’s a pilot program from the San Diego Association of Governments developed and purchased using grants from the federal government’s National Institute of Justice and the Department of Homeland Security, according to The Center for Investigative Reporting.
TACIDS works through Samsung tablets and Android smartphones that were distributed to specific officers (SDSUPD uses a tablet). Most of the 25 participating agencies were given one or two devices, although the sheriff’s department received the most with 64, while the San Diego and National City police departments received 27 and 26 respectively.

Notice that the story practically brags about the fact that a college police department is going to have gear more appropriate in the battlefield than on campus.
Maybe the author of the piece in The Daily Aztec is saying more than he meant to.
Is there a chance that the Department of Homeland Security is funneling all this money and materiel to local police to prepare them to quell popular uprisings? One expert thinks that may be the case.
Jim Fitzgerald worked for eight years as a vice and narcotics squad detective in Newark, New Jersey, before joining the staff of The John Birch Society. He is point man for the conservative organization’s “Support Your Local Police” initiative.
In an interview with The New American, Fitzgerald said there is “virtually no use” for the military-grade equipment being bought by local law enforcement with DHS grant money.
“The only reason to have this equipment is to use it,” Fitzgerald said, and it is likely it would be used against local citizens who have risen up and created some sort of civil disorder.
DHS, Fitzgerald believes, may be anticipating these riots and looks to them as a justification for the militarization of the police.
“They [DHS grants] are not good, not healthy, and not constitutional,” Fitzgerald adds.
The question that remains is how long citizens will accept the arming of their local police until they rise up in resistance and, as DHS probably has orchestrated, are targets of all the tactical weaponry, ammunition, and monitoring technology.
From license plate readers to facial recognition software, from surveillance cameras to cellphone signal trackers, the Department of Homeland Security is providing police with all the gadgets, hardware, and software necessary to keep everybody under surveillance, without the targeted public ever realizing that it’s the Capitol, not the cops, that are behind the monitoring.
Local police who participate in the program will have access to a shockingly broad array of personal information of citizens. Facial recognition technology, license plate readers, and stop light camera video feeds will all be funneled to a Regional Operations Intelligence Center where FBI, police, and DHS agents can watch the live feeds.
In fairness, most police chiefs and sheriffs are unaware of any larger, more sinister DHS program to foment riot as a pretext for quelling it.
But whether these lawmen realize it or not, when they accept federal gadgets and grants, they are surrendering their independence and their citizens’ civil liberties.
Perhaps the most important argument against the federalization of local police departments is that there is not a single syllable of the Constitution authorizing any such federal participation in law enforcement. If the power isn’t granted to the federal government in the Constitution, then authority over that area remains with the states and the people as described in the Tenth Amendment.
Self-serving bureaucrats inside the U.S. government are tirelessly trying to obliterate local police forces answerable to local citizens and promote the consolidation movement as a step toward federalization of law enforcement. These proponents of regional and national police forces desire nothing less than the eradication of all local police departments and sheriffs’ offices, the surrender of state and municipal sovereignty, and the conversion of police into federal security agents sworn not to protect and to serve their neighbors, but to protect the prerogatives of politicians.

Joe A. Wolverton, II, J.D. is a correspondent for The New American and travels frequently nationwide speaking on topics of nullification, the NDAA, and the surveillance state.  He is the host of The New American Review radio show that is simulcast on YouTube every Monday. Follow him on Twitter @TNAJoeWolverton and he can be reached at jwolverton@thenewamerican.com