State Department: "We Can Use Whatever Definition of Transparency We Want" 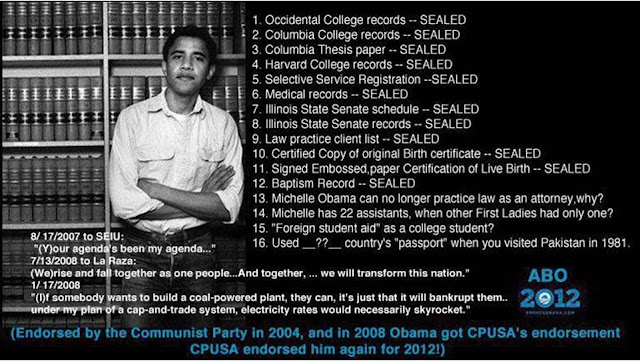 And all of this time we sheeple have been thinking "transparency" meant, well, being transparent. The State Department Press Secretary finally explained it.  This really IS the most "transparent and ethical administration ever".  It just depends on what your  definition of IS is. If you believe that lying about your birth certificate, your radical associations, what you knew about Fast and Furious, what you know about Benghazi, what you know about everything that you say you know nothing about is really the embodiment of "transparency" well, there you go.  Cleared it all up for us.
-W.E.

State Department Deputy Press Secretary Marie Harf was questioned repeatedly by Associated Press reporter Matt Lee about the Obama administration’s lack of transparency during Monday’s State Department Briefing.
When Harf’s initial attempt to defend the administration failed she changed her tactics arguing for a new definition when she stated “we can use whatever definition of transparency we want.”
Below is a transcript of the exchange:

Q: So then my last one is, when this current president came into office, he and his first secretary of state spent a lot of time doing what they said was trying to — trying to repair what they said was damage done to the U.S. image and reputation abroad during the eight years of the George W. Bush presidency. Are you concerned at all that the weight of these revelations, coming as they are with increasing — seemingly increasing frequency, is negating the — that effort to improve your — the image of the United States abroad? Because it certainly appears that many countries, whether they’re warranted or justified in feeling this or not, are looking at the United States now as some kind of, you know, Orwellian Big Brother type outfit.
MS. HARF: Well, I think I’d make a few points. The first is that, whether it’s on these alleged intelligence activities, on counterterrorism operations, on a number of issues, this administration has taken steps to increase the transparency. Not as much as, I’m sure, everybody would like in this room, but certainly whether it’s the president giving speeches about counterterrorism, giving speeches just recently about our intelligence gathering and how we’re reviewing that, we’ve actually taken steps to be more transparent both to our people but to other countries around the world. So I think that people do look at that as a positive step in the right direction. But when it comes to specific intelligence matters, we also, I would underscore here, share intelligence with a number of our partners and allies. Intelligence is collected, broadly speaking, to protect our citizens, to protect their citizens as well. So people understand the value of intelligence gathering around the world, right? It’s where the balance lies between privacy and security, and those are the conversations we’re having right now.
Q: Yeah, but people don’t — like, when you say that you’re being more transparent, people don’t like what they see when they’re being more — so just being more — coming out and say –
MS. HARF: Well, I would disagree a little bit with your notion there. I think people appreciate when the president or the secretary, other folks come out and say, I know there have been a lot of allegations out there. Here’s what we can say we’re doing, here’s how we’re looking at it, and when we have a path forward, we’ll let you know that as well.
Q: OK. But you claim to be being more transparent, but in fact you’re not. You’re not at all being transparent. You’re saying that –
MS. HARF: Well, I take issue with your characterization.
Q: Oh, really? Well, but you’re not confirming any of these reports, whether they’re true or not.
MS. HARF: That –
Q: How is that transparent?
MS. HARF: Well, I think we can use whatever definition of “transparent” we want.
Q: I think there is only one definition.
MS. HARF: What I would say is that the president has gotten — has stood up, whether it’s on counterterrorism — he stood at the National Defense University and said, I’m going to talk to you about how we make decisions on counterterrorism operations — for the first time.
Q: Yeah, but wait — yeah, but it’s either transparent or it’s not. It’s either transparent or it’s opaque, right? You can’t have –
MS. HARF: Matt, that — no. This isn’t a black and white issue. That’s absolutely not the case.