HOW TO TURN A REPUBLIC INTO A SERFDOM

The United States is quickly descending down the path of serfdom in a 21st century application of modern day feudalism.
This is a two part series which briefly traces the rapid decent of what once was the most dynamic and wealthiest empire in the history of the planet, to a country which will soon be labeled as a Third World country. These times are marked by the elite moving to own everything and using the power of the government to accomplish their end-game.

A new strategy has appeared in America which threatens to make a real live serf out of nearly every American citizen. The main emphasis of this attack is the ongoing conversion to  Communitarian law and a dramatic departure from our time honored Constitutional law. There are ten steps to implement on the way to your enslavement and incarceration into a feudal society.
The erosion of these liberties is not the result of a series of random, unconstitutional acts by a set of power-hungry globalist minions. Instead, the new and emerging system of American justice is bringing forth a sweeping set of reforms which is quickly ending our noble experiment with inalienable, individual liberties. This new system of justice, being visited upon our shores, is called Communitarian law and it represents the antithesis of Constitutional law as it champions community interests at the expense of individual liberties. Terms like social justice, sustainability, smart growth, collectivism and sacrificing for the greater good represent some of the buzz words and phrases of Communitarian law.
Americans have come to expect that our individual liberties are granted by God, not by man or by government. We also believe, as Thomas Jefferson wrote, that these rights are inalienable and may not be taken away by government. The United States Constitution prevents not only the implementation of tyrannical practices against its citizens, it also prohibits the will of the majority from abusing the civil liberties of the minority.
Sadly, the United States Constitution is on life support and the patient is nearing the end. So where is this leading the country?

The Landmark Event of the Kelo Supreme Court Case

The Supreme Court case of Kelo v. The City of New London, CT. (2005) usurped America’s Fifth Amendment rights with regard to property rights. Government can now seize your property, and for the first time, award your property to a private entity who is presumably a cohort (i.e. benefactor) of someone in government. Some Americans are decrying these acts as unconstitutional. These Americans are correct. However, all of these acts are legal under the Communitarian system of justice because the intent is based on what is in the common good and not on what is constitutionally legal. And who gets to decide what is in the common, or the communist good?  That would be the people bringing you Communitarian law, the global elite. Don’t forget the old axiom of the Golden Rule. He who has the gold, makes the rules. In the modern day application of this old saying, it states that he who prints the money gets to steal your home.


Our abandonment of the U.S. Constitution in favor of Communitarian law allows the Federal Reserve, through QE3, to purchase $40 billion of mortgage based securities and will continue to purchase $40 billion worth of mortgaged properties each and every month until they own every single piece of real estate in the country. This process began on September 13, 2012 and will continue until all privately owned properties are held by the money changers. At the present rate, it will not be long until private home ownership will become a rare event.
On the way to the new serfdom in America, a new house stealing strategy has emerged over the past several months. With many homeowners presently underwater, the five megabanks are conducting reappraisals and billing the difference between the loan amount and the current appraised value of the house. When the homeowner cannot find the cash to pay the difference, usually within a 30 day window, the bank forecloses. With the commonality of this practice which victimizes financially distressed Americans, scarcely a word of this has been reported in the corporate controlled media. This process, once stalled, has begun again with a vengeance and this aspect of the MERS fraud is rapidly increasing with breakneck speed.
If the bail out money from QE1 and QE2 had been applied to the totality of America’s home commercial mortgages, every home and business mortgage would have been paid off in full. Instead, the bail out money went to crooked bankers who broke the law in perpetuating the crises in the first place through the Ponzi scheme of the derivatives, which sent our home values plummeting.


The bailouts set the stage for the Federal Reserve to accomplish its two goals of seizing all private property in American and collapsing the dollar as a prelude to the roll out of a new global currency. The bail-outs were the beginning of the end for America and marked the historical shift of the American citizen being transformed into a serf living on the feudal manor.

Welcome to the new Americana feudal manor and you and I are the serfs. Maybe this is why Homeland Security purchased 2.2 billion rounds of ammunition and 2700 armored personnel carriers, over the past year. This was necessary because even the globalists realize that even the most dumbed down American might think that fighting for their home is worth taking on the corrupt federal government. Take your pill, we are going for a ride.
When one steps back and looks at the brilliant strategy concocted by the global elite, one can only marvel at their cleverness. First, Wall Street Banksters play the reckless derivative debt game and collapses the world’s economy with a domestic American debt of 1.5 Quadrillion debt. Second, home values dramatically dropped and foreclosures reached record levels. Third, the banks begin seizing underwater properties with money printed out of thin air by the Federal Reserve. Fourth, the economy eventually collapses from printing 40 billion dollars of mortgage backed securities every single month. Fifth, global currency and global government is ushered in. Sixth, Obama will soon move to adopt the UN gun ban treaty, which will leave the emerging American serfs totally defenseless and the government will uses the newly purchased 2.2 billion rounds of ammunition on the dissenters. Seventh, with Americans out of their homes, they can be forced into the new stack and pack cities complete with their 200-500 square foot Agenda 21 style micro-apartments. Eighth, Americans will be subject to forced vaccines and real depopulation will begin in earnest. Nine, one child limits will be placed on families, and tenth the 10% who survive this vicious depopulation transition will live in the darkest days of humanity in a hellish nightmare that even George Orwell could not have foreseen. And the overarching overlay will consist of the government operating under the brutal authority of the NDAA and Executive Order 13603.

And this is just the tip of the iceberg. When one steps back and takes a macro view of the rapidly unfolding events, one can see the final bankster attack upon the resources and civil liberties of the country which will sweep across the country with devastating effectiveness. This will be the subject of Part two. 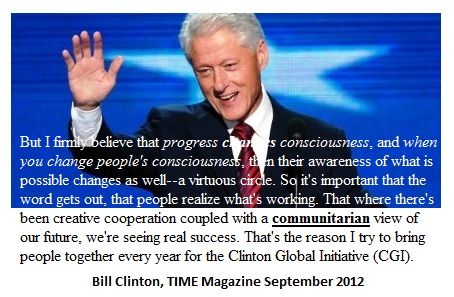