PRISM: BIG BROTHER (ANTI-CHRIST) GOVERNMENT IS NOW IN THE OPEN 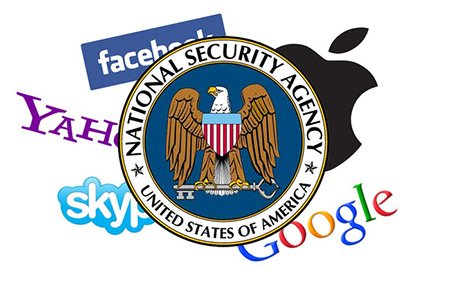 To those of us who are paying attention, signs of the coming anti-christ system of Revelation fame, is upon us.  It is hard to NOT see a big brother government apparatus not in it's infancy, but mature and ready to receive its prophesied leader, the "man of perdition" and for a conditioned people ready to accept his mark.  Just listen to whistleblower Ed Snowden:

"The months ahead, the years ahead, it is only going to get worse until eventually there will be a time where policies will change because the only thing that restricts the activities of the surveillance state are policy.  Even our agreements with sovereign governments we consider that to be a stipulation of policy rather than a stipulation of law and because of that, a new leader will be elected, flip the switch, say that umm, because of the crisis, because of the dangers we face in the world you know, some new unpredicted threat we need more authority we need more power and there will be nothing the people can do at that point to oppose it and it will be turnkey tyranny."
-W.E.

For years at here Vigilant Citizen, I’ve been posting articles about the extreme amount of Big-Brotherish surveillance that is happening in the United States and the world. While some have dismissed these stories as “paranoid conspiracy theories”, recent revelations about the NSA’s project PRISM prove that there were no theories involved – just plain facts.
PRISM is a top-secret program that allows the NSA to directly access the servers of numerous online services and to obtain all kinds of information about its users. Since the story came out, some services such as Facebook denied any involvement with this program, stating that the NSA does not have access to their servers. The Guardian has however published leaked top-secret PowerPoint slides used to trained NSA agents that clearly state that 1- The NSA can directly access these servers and 2- Most major providers are directly involved in the program. Here are the slides. 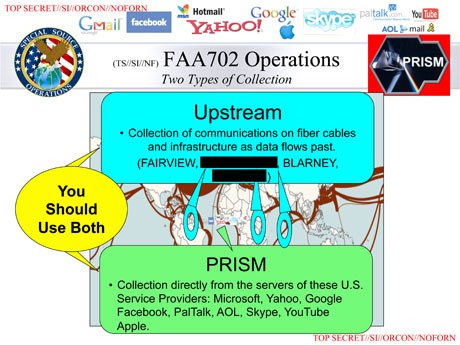 This slide clearly states “Collection directly from the servers of these U.S. Service Providers”. 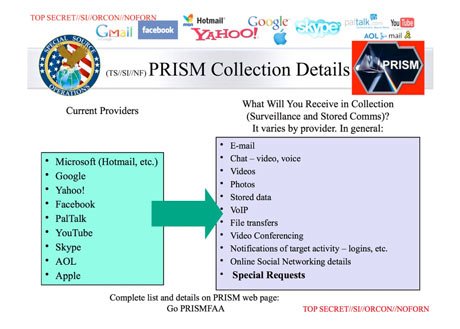 Here we see that no stone is left unturned by NSA spies: E-mails, video and voice chats, file transfers and social networking are all targeted. Yes, even Skype calls can be spied on by agents. 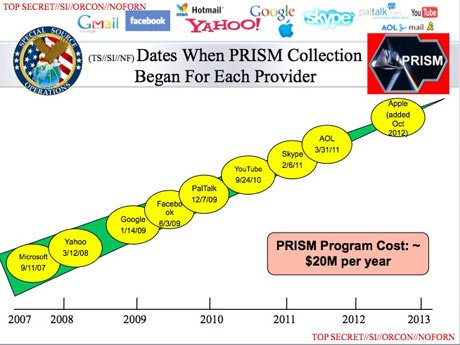 Here we see the exact time where each provider joined PRISM. The 1st one to join? Microsoft. In the light of my recent article on Microsoft’s gaming console Xbox One, this is not surprising. Now that it has been confirmed that the Xbox One will require an internet connection EVERY 24 hours, it is quite possible that the data collected by the console (audio and video) will be transferred right to NSA servers.

One might ask: Where does this enormous amount of data get processed? In 2012, I posted an article entitled The NSA Is Building the Country’s Biggest Spy Center which stated:


“When construction is completed in 2013, the heavily fortified $2 billion
facility will encompass 1 million square feet, including four 25,000-square-foot areas to house endless rows of high-powered servers. The center will be fed data collected by the agency’s eavesdropping satellites, overseas listening posts, and secret monitoring rooms in telecom facilities throughout the US. The incredible processing power of this facility will be used to scan e-mails, phone calls, text messages, tweets or any other kind of communication. As a former NSA officer states, while holding his thumb and forefinger close together “We are that far from a turnkey totalitarian state.”

I guess that the “turnkey totalitarian state” is now fully effective.

The whistleblower that leaked this story is named Ed Snowden and the US Government is looking to severely prosecute him. Here’s a YouTube video of him describing how what’s happening now is WORSE than the novel 1984.


“Because even if you’re not doing anything wrong, you’re being watched and recorded. And the storage capability of these systems increases every year consistently by orders of magnitude to where it’s getting to the point where you don’t have to have done anything wrong, you simply have to eventually fall under suspicion from somebody, even by a wrong call. And then they can use the system to go back in time and scrutinize every decision you’ve ever made. Every friend you’ve ever discussed something with. And attack you on that basis, to derive suspicion from an innocent life, and paint anyone in the context of a wrongdoer.”

So to those who say “If you have nothing to hide, you shouldn’t worry”. You’re wrong. Dead wrong. And, to be honest, it is this kind of attitude that will destroy whatever is left of liberty and privacy in the U.S. and the world. Furthermore, if you are outside of the United States – especially in countries such as Canada, UK or Australia – do not think that you’re safe. The elite knows no national boundaries and what has be revealed in the United States is most likely already happening in many other countries.
It is seriously time to wake up and to let people know that privacy, freedom and democracy are in serious jeopardy here. There is no speculation, no “tin foil hats” and no conspiracy theory. This is what’s happening right now and, if you value your freedom, you better do something about it and get your voice heard.
Email Post
Labels: Big Brother Surveillance Society