DRONE WARFARE ON AMERICA: COMING SOON TO A NEIGHBORHOOD NEAR YOU

The headlines are scary enough to cause nightmares but our ever diligent news media either ignores the implications and lulls us back to sleep or makes light of the situation.
Such is America today where the government first claimed the right to suspend the Bill of Rights to gain advantage and track terrorists. Then they put most of us in the categories they defined as terrorists. Then that same government gave itself the power to arrest and detain without trial or legal representation any American who opposed the government. And, of course most conservatives do oppose the government we now have. Then the government announced they will be flying predator drones across America’s skies. And now, our government declares it has the right to kill any American, on American soil, it decides is supporting terrorism – and take note of how they defined terrorists in the first place.
For purposes of explanation I am defining the Democratic Party as “our government” since they successfully stole the last elections and are now calling all the shots in Washington. (no pun intended) Now some of our elected representatives are trying to negotiate a compromised solution whereby it would take a panel of judges to decide which American will be targeted for assassination. Isn’t that a relief.


US senators propose assassination court to screen drone targets
By Judson Berger, Published February 08, 2013, FoxNews.com
It sounds like an Orwellian idea from a futuristic sci-fi movie. Government officials gather in a secret courtroom, poring over documents and weighing whether to approve the fly-by killing of a suspected terrorist.
If the judges say yes, the target dies. If not, the target lives.
But U.S. senators are now floating the idea of an assassination court as a way to rein in the ever-expanding drone program — a secretive operation that, as it is, sounds like thriller fiction, but isn’t.
The idea was bandied about during Thursday’s confirmation hearing for CIA director nominee John Brennan, who fueled the talk by saying he thinks the concept is “worthy of discussion.” The nominee, as a vocal supporter of the targeted-killing program, has come under scrutiny for what some lawmakers see as the administration’s unchecked power to kill, even if the target is an American citizen.
Read more: http://www.foxnews.com/politics/2013/02/08/us-senators-propose-assassination-court-to-screen-drone-targets/?test=latestnews#ixzz2KRD6bVhq

Will there be more house explosions coming soon to your neighborhood?
There has been a rash of house explosions across America lately, due mostly to faulty gas lines. A few were even the result of some murderous intent. I am not a conspiracy nut like the guy who claimed the house explosion in Indianapolis was caused by a drone launched Hellfire missile. But images of drone strikes in Pakistan that have targeted al Qaida insurgents produce results that are almost identical. It is also well known that the government has been creating a database of GPS coordinates for every home. Global Positioning Satellites have been used to target the drone strikes in Pakistan, as well. Lately it seems fairly easy to spot the homes of conservatives because they almost always have an American flag outside. And conservative bloggers like me get a lot of web site hits from Washington, D.C. Maybe the current wave of house explosion were caused by gas explosions but it sure gives the government a handy excuse to cover their collective asses when the poo-poo hits the fan.
Local news media thinks this is all very funny.
The Kentucky Enquirer ran some political cartoons on its editorial page today. They called it “A lighter take on the week’s news” but I don’t see any humor in it. The largest one shows a smiling Obama riding a predator drone. Granted, the cartoonist made reference to the Constitution but since the media, with the exception of Fox News, hasn’t given much coverage to the discussion on drone warfare over America’s skies or the authorized killing of Americans, the point of the humor doesn’t come across very well. 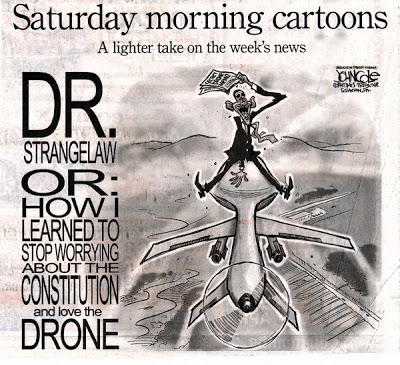 This is what happens when the mainstream news media fails to publish stories that may cause embarrassment to a Democrat administration. Couple the Fox News coverage about the drones to another story this past week about a candid remark made by Democrat Rep. Maxine Waters from California and you have all the makings of a Tom Clancy novel. This was picked up by several conservative blogs including the following from theconservativebyte.com.


Maxine Waters: Obama Has a Database on Everything About Every Individual
Posted on February 9, 2013
Here’s Maxine Waters. This was last Sunday on TV One’s Washington Watch with Roland Martin. Maxine Waters, Democrat from California. Her district is basically the Watts area of Los Angeles, and Roland Martin said, “The reality is like anything else, you’d better get what you can while Obama’s there because, look, come 2016, that’s it.” Now, what Roland Martin’s saying here is all of you who are looking for prosperity from the government, you better get it and get it now. Get it while you can, get it while Obama’s there, because come 2016, he’s not gonna be there, and then you’re gonna be on your own. You better get what you can get now. And here’s what Maxine Waters said in reply.
WATERS: Well, you know, I don’t know. And I think some people are missing something here. The president has put in place an organization that contains the kind of database that no one has ever seen before in life. That’s going to be very, very powerful. That database will have information about everything on every individual in ways that it’s never been done before.


Rush Limbaugh also had an interesting opinion on this candid statement.
“RUSH: Hmm. Okay. Cool. Fine. What’s that got to do with getting benefits after 2016? Maybe she didn’t understand what he was talking about. He’s talking about, you better get in there, get your goodies right now because in 2016 he’s gone. Better get it while you can. She says, “I don’t know, Roland, he’s got this database.” Maybe she means he’s not going anywhere. Maybe that’s what she means, folks. He’s not going anywhere, ’cause he’s got this database with information about everything on every individual. I’ll bet that’s what she meant, Snerdley. That 2016 isn’t a big deal ’cause he’s not going anywhere. That has to be it. ”
And lets not forget that ominous comment attributed to Barack Hussein Obama’s White House Senior Advisor, Valerie Jarrett, “After we win this election, it’s our turn. Payback time. Everyone not with us is against us and they better be ready because we don’t forget. The ones who helped us will be rewarded, the ones who opposed us will get what they deserve. There is going to be hell to pay. Congress won’t be a problem for us this time. No election to worry about after this is over and we have two judges ready to go.”
Now all we need to worry about is Barack Hussein Obama’s Civilian National Security Force, the one he promised to create back in July 2008. With this update from WesternJournalism.com.


Is Obama Looking To Create A Civilian National Security Force?
February 9, 2013 By Daniel Noe
The Department of Homeland Security purchased 1.6 billion rounds of ammunition in just the past 10 months. The military used approximately 70-million rounds in each year of the Iraq war. Could it be that DHS is looking to arm a new civilian national security force?

It’s getting to sound like George Orwell’s 1984 all over again, only worse. Orwell’s worst fears were re-indoctrination.

My name is Nelson Abdullah and I am Oldironsides.
Email Post
Labels: Collapse from Within Communism Constitution Drones Infiltrated Nation Loss of Liberty Obama Police State