USA AND ISRAEL IN OPEN FEUD 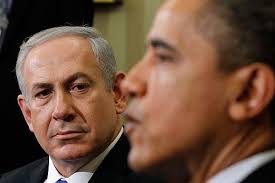 WEEPING EAGLE NEWSFLASH;  OBAMA SIDES WITH MUSLIMS NOT ISRAEL, AND PROBABLY WOULD AGREE WITH IRAN ("WIPE'EM OFF THE MAP") IF IT WASN'T SO BLATANTLY PRO ISLAM.

Feuding between the US and Israel burst into the open when Benjamin Netanyahu, Israel’s prime minister, sharply criticised recent US statements about Iran while the White House said President Barack Obama would not meet Mr Netanyahu in the US this month.
Mr Netanyahu made a stinging attack on Tuesday on Washington’s refusal to establish a “red line” for Iran’s nuclear programme – a point beyond which US military action against Iran would be taken. Read More

The White House's response marks a new low in relations between Netanyahu and Obama, underscored by the fact that this is the first time Netanyahu will visit the U.S. as prime minister without meeting Obama; PM to meet with Clinton
Breitbart

President Barack Obama will be visiting one of his biggest fans soon - late night talker David Letterman.
The president will chat with the "Late Show" host during a trip to New York City next week, according to the National Journal. Letterman's nightly monologues mostly spare the president from satirical ribbing, saving his most cutting remarks for the Romneys ... or even former President George W. Bush.
The news comes on the same day Obama told Israeli Prime Minister Benjamin Netanyahu he couldn't meet with him due to a scheduling conflict.
The interview will be the second Obama has had with Letterman since the comic made a crude, demeaning joke about former vice presidential candidate Sarah Palin's daughter.
Letterman later apologized.
Email Post