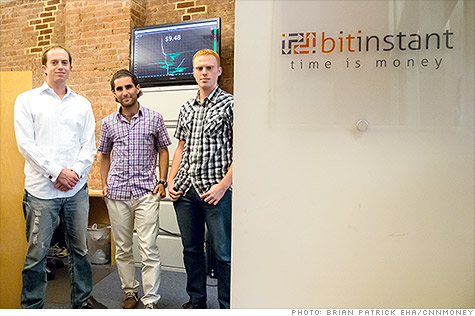 An obscure but growing digital currency is about to get a new link to the physical world. Within the next two months, money transfer service BitInstant plans to launch the first internationally accepted Bitcoin-funded debit card.
"People are always asking, 'Well, what can I spend Bitcoins on?'" says Erik Voorhees, BitInstant's head of communications. "You can finally just say, 'Everything.'"
The Bitcoin economy sounds like something out of science fiction. Launched in 2009, it's a first-of-its-kind "cryptocurrency" consisting of mathematical tokens. Bitcoins aren't issued by any government or bank. The community-backed system is facilitated by complex cryptography and a peer-to-peer transaction network.
New coins are created by "mining," a hardware-intensive task that requires using powerful computer systems to solve complex algorithms. There's a finite supply: The system is designed to create a maximum of 21 million Bitcoins, a target that won't be hit for a decade or more. Right now there are roughly 9.8 million Bitcoins in circulation, worth a combined total of around $96 million.
Bitcoins are still far from mainstream, but they can be used as a valid form of payment for all kinds of goods and services -- shopping site Bitmit offers a look at some of what's available. The coins are a bit like the local currencies used in small towns like Ithaca, N.Y.: They have value because a community has collectively decided to back the notes as tender.
What is a Bitcoin worth? Like any currency, it fluctuates.
A spate of media attention in 2011 -- most notably a Gawker article that linked Bitcoin to Silk Road, an underground drug bazaar -- sent the price of a Bitcoin to a stratospheric high of more than $31. But e-currency thefts followed, and by November 2011 the price of a Bitcoin plummeted to $2.
None of that fazes BitInstant, an 11-month-old New York startup that wants to build bridges between the Bitcoin economy and the regular consumer world.
"We want to be the Apple of Bitcoin," says Charlie Shrem, the CEO of BitInstant. "We want everything to be sleek, sexy, beautiful, fluid, automated."
In two weeks, it will launch Bitcoin Wireless -- a way to buy wireless time for your mobile device from over 300 carriers, they say, including major U.S. providers such as Verizon (VZ, Fortune 500) and AT&T (T, Fortune 500).
BitInstant's core business is facilitating Bitcoin transactions across a variety of exchanges. Want to swap $100 in cash for Bitcoins? You can deposit the cash at one of 700,000 locations worldwide and receive the Bitcoins in your virtual wallet instantly.
BitInstant now handles a transaction volume of $2.5 million a month, Shrem says, and is close to closing a $1 million round of venture capital financing -- the largest ever for a Bitcoin-related company.
The forthcoming Paycard is the company's biggest bid yet for mainstream adoption. BitInstant is partnering with two major banks, one domestic and one international. The company isn't releasing their names yet, but Shrem says the arrangement will let the Paycard connect with MasterCard's (MA, Fortune 500) network.
That means Paycard can be used at traditional retailers. Shrem calls the card "our entrée into the real world." It will be a gradual introduction: BitInstant plans to limit its initial release to 5,000 cards.
Gavin Andresen, a lead developer in the Bitcoin community, says he's looking forward to using the Paycard, especially for international travel.
"I was invited to Europe a few months ago, and the company hosting me reimbursed my airfare expenses using Bitcoin, which was much more convenient than dealing with international wire transfers," he told CNNMoney in an email. "It would have been even more convenient (and just as simple) if I had them reimburse to an international BitInstant debit card that I could use for daily expenses when traveling."
Each Paycard will have a unique Bitcoin address and a QR code that, when scanned by a mobile app, will allow the instant digital transfer of Bitcoins to the card, where they get converted into the owner's national currency. Shrem says one of the card's chief benefits will be its low conversion rate between foreign currencies -- "lower than what Travelex and Western Union, all of these airport places, would charge you."
Bitcoin's backers admit that there is some inherent risk to the electronic currency. After all, there is no FDIC for Bitcoin. It's also volatile: In the last 30 days, the value of a Bitcoin in U.S. dollars has ranged between $7.58 and $15.40.
While Bitcoin is no longer in its infancy, it may have entered its "terrible twos." Exchanges have been plagued by hacks, trading glitches and Madoff-esque pyramid schemes. The currency's image as a tool of hackers and anti-government types has both helped and hurt its public profile. (It's worth noting, however, that while Bitcoin exchanges have been hacked, Bitcoin's encryption code never has been.)
Andresen recently cautioned restraint when trying out the experimental currency: "Only invest time or money in it that you can afford to lose."
Still, he's eager to test out Bitcoin's new real-world link.
"My kids are about to become teenagers, and I think I'll give them BitInstant cards in their stockings this Christmas," he says. "They should be a fantastic, low-cost way to give them a little bit of money to spend while retaining the ability to monitor their spending as it happens."
Why would anyone want to change their hard-earned money into Bitcoins? One advantage Bitcoin fans cite is the ability to move money instantly anywhere in the world. By eliminating the middlemen -- credit-card companies, financial institutions, PayPal -- Bitcoin allows money to change hands digitally as quickly as cash does in the real world.
With Bitcoins "you have total control of your money," Voorhees says. "It's quite empowering."