We Interrupt This Program......

You’re in line at the grocery store and your cell phone rings.


“Excuse me, I have to take this,” you say politely to the cashier.  “It’s the President – I’ll just be a second.”
Coming soon to a cell phone near you are “national alerts”, authorized by Obama’s most recent decreeExecutive Order entitled “Assignment of National Security and Emergency Preparedness Communications Functions”.  This Order authorizes the Executive Branch to take control of all methods of communications, including your phone, the television and the radio.  This innocuous-sounding document is anything but harmless.
This is not just reserved for use in the event of a dire emergency, to warn the people, if, for example, enemy soldiers began parachuting onto American soil ala Red Dawn.  The Order allows the Executive Branch to seize control of all forms of digital communications at any time, as stated in Section 1.
Such communications must be possible under all circumstances to ensure national security, effectively manage emergencies, and improve national resilience.
What forms of communications can be co-opted?  Anything regulated by the FCC.  This means its open season on cell phones, radio stations, cable networks, satellite systems and television stations.  It doesn’t matter if the system is publicly owned or privately owned, according to Section 5.2.e
The Secretary of Homeland Security shall….satisfy priority communications requirements through the use of commercial, Government, and privately owned communications resources
Many of our favorite repressive government agencies have been invited to the propaganda party.  Section 3.2 gives us the “guest list”.
The Executive Committee shall be composed of Assistant Secretary-level or equivalent representatives designated by the heads of the Departments of State, Defense, Justice, Commerce, and Homeland Security, the Office of the Director of National Intelligence (DNI), the General Services Administration, and the Federal Communications Commission, as well as such additional agencies as the Executive Committee may designate. The designees of the Secretary of Homeland Security and the Secretary of Defense shall serve as Co-Chairs of the Executive Committee. 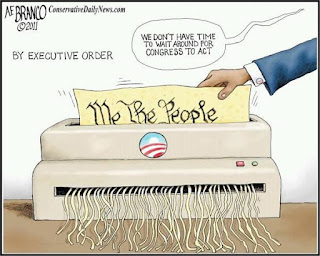 What is the real purpose of this Order, if not to alert the American people to an emergency?
The dissemination of pro-government propaganda, pure and simple.
With alternative media rapidly overtaking mainstream media news ratings, the de facto government of the United States simply can’t keep up.  MSM is losing more viewers every day, as alternative journalists repeatedly debunk the stories offered by the likes of CNN, Fox, and the networks.
To combat this, and peacefully keep the people in line, the government needs to manipulate the masses.  Using the psychology espoused in Adolf Hitler’s manifesto, Mein Kampf, the government needs to be able to immediately communicate its wishes to people, and do so in ways that cause the recipients of the “information” to believe that acting in accordance to those wishes is the only safe and reasonable option.
"The broad mass of a nation does not consist of diplomats, or even professors of political law, or even individuals capable of forming a rational opinion; it consists of plain mortals, wavering and inclined to doubt and uncertainty. As soon as our own propaganda admits so much as a glimmer of right on the other side, the foundation for doubt in our own right has been laid. The masses are then in no position to distinguish where foreign injustice ends and our own begins."   ~  Adolf Hitler, Mein Kampf
The next time you’re watching television or listening to the radio and hear the words, “we interrupt this broadcast” be prepared to think critically.  Use your reason and the things that you know are fact before blindly following the instructions.  By doing so, you will be one of the very few not being blindly led even deeper into slavery by the hands of master manipulators.
Email Post