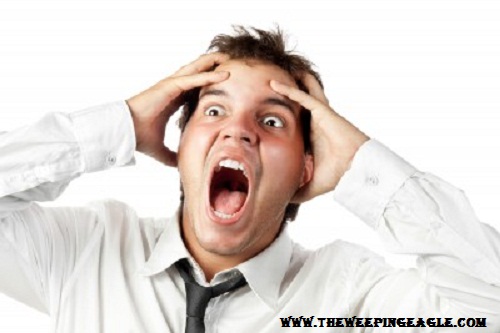 This is just what we can expect when we go down the road to depravity, and the government sanctions it- INSANITY -W.E.


On orders from Barack Obama’s Department of Justice, officials with the University of Arkansas at Fort Smith have given permission for a 38-year-old man to use the women’s restrooms on campus.
The report comes from Campus Reform.org, which explained that the individual also is seeking to have someone pay for a sex reassignment surgery to change from male to female. Already living as a female, the individual, identified in the report as Jennifer Braly, started using women’s restrooms on campus, but quickly was the subject of complaints from women who saw him there.
The university had tried to make accommodations, designating gender-neutral restrooms in some buildings.
Not good enough, however.
Braly filed a complaint with the Civil Rights Division in the Department of Justice under Attorney General Eric Holder, school officials reported. The DOJ contacted the school.
“[T]he office of civil rights basically made its expectations through the attorney and the decision was made to respond to that direction,” said Mark Horn, the vice president of university relations. “[T]he DOJ complaint caused revisiting of our thinking.
“In the eyes of the law this individual [Braly] is entitled to use the bathroom that she identifies with,” Horn said.
The DOJ complaint was filed by Braly after the university told him to use any of the gender-neutral restrooms on campus.
“One problem to this is there are not unisex bathrooms in every building,” Braly wrote in an online essay about how other people should contribute to his surgery costs. “Especially the two main buildings where most of my classes are, so I have to go to a completely different building to use the restroom.”
While the university offered to convert other restrooms to gender-neutral, Braly said that wasn’t satisfactory.
The Campus Reform report said while anatomy matters little to the DOJ, it still remains a concern for other students.
“‘I disagree with allowing a male to use the female restrooms,” Amanda Shook, a senior at UA, told Campus Reform. “Even if they are a transgendered person, they are still a man, and should have to use the men’s restroom.”
The DOJ and school both have declined to release the letter giving the school directions on the dispute, Campus Reform reported.
The DOJ told Campus Reform that the records “pertain to a currently active Civil Rights Division enforcement and access to the records should therefore be denied pursuant to 5 U.S.C. § 552(b)(7)(A) since disclosure thereof could reasonably be expected to interfere with Civil Rights Division enforcement proceedings.”
While Braly did not respond to Campus Reform requests for comment, there is an extensive monologue by Braly on the fundraising website WePay.
That reflects that $75 has been contributed to the estimated $18,500 costs of the surgery.
Braly writes that his finances are depleted because when a second marriage ended, a custody battle “drained all my funds.”
“I am now a full-time student at the University of Arkansas Fort Smith. Most of my life is pretty normal as fitting into female society. I am passsable (sic) and have a part-time job. At the university I am running into problems all over the place.”
Braly explains that the choice to use women’s restrooms was unnoticed for a time.
“Then I took General Psychology and had asked the professor if I could give a lecture on Gender Identity Disorders for some extra credit. She not only allowed me to speak to my class but her other 2 classes as well. She also referred me to another professor and I spoke in his class too.
“I was excited I was educating people about being a transsexual and the other types of Gender Identity Disorders. Those lectures would be the beginning of all my problems. As I did get many great responses from students how my lectures greatly changed their perspective of what transsexuals are, some students were not so accepting.
“Some saw me using the womens public restrooms and complained to the university that they didn’t think I should be using the restroom with them.”
The report also complains that Braly didn’t get special accommodations in living arrangements.
“There came a problem that they would not let me room with males, and I could not room with females either unless I became friends with them and disclosed all my medical information to them…” the report continues.
“I tried to be creative and work with them on this, but to no prevail (sic),” the report said.
“Regardless of where I am at in my transtion (sic) I should have the same rights as every other female.”
Part of the reason for requesting donations for the surgery is because Braly’s income goes partly toward the monthly costs of hormone treatments as well as “required psychotherapy for transsexuals.”
Email Post