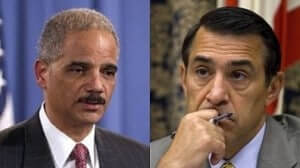 There are not many in Congress with the courage of their convictions, but Issa is earning much kudos from yours truly in holding to the rule of law by going after one of Obama's henchmen. Bravo! -W.E.


Rep. Darrell Issa, California Republican and Chairman of the House Oversight and Government Reform Committee, has yet to charge Attorney General Eric Holder for contempt of Congress for failing to supply Mr. Issa’s committee with thousands of pieces of documentation relating to the Justice Department’s gun walking operation known as “Fast and Furious.”
Rep. Issa told me on Tuesday night to expect movement on the contempt charge towards A.G. Holder very soon.
“We’re going through a process,” said Congressman Issa. “That process is going to take weeks but not months more.”
In late January, Congressman Issa’s committee threatened contempt proceedings against Attorney General Eric Holder, if Mr. Holder failed to comply with his committee’s congressional subpoenas for the Fast and Furious documents by February 9.
A four-page letter from Mr. Issa to A.G. Holder read:
"If the department continues to obstruct the congressional inquiry by not providing documents and information, this committee will have no alternative but to move forward with proceedings to hold you in contempt of Congress."
When A.G. Holder did not comply with the committee’s subpoena by the February 9 deadline, Rep. Issa sent a seven-page letter to Mr. Holder to note that the AG should designate someone at the Justice Department to “serve as a conduit for dealing with the contempt proceedings, should the department continue to ignore the committee’s subpoena.”
The original subpoena from Mr. Issa’s committee was issued on October 12, 2011, but according to Mr. Issa and Senator Chuck Grassley, ranking member of the Senate Judiciary Committee, Congress has received only ten percent of the documents relating to the failed gun walking operation.
Email Post