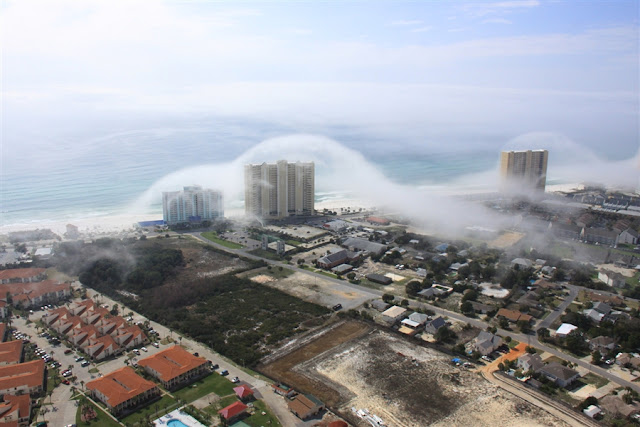 
Fog rolls up along the shore of Panama City Beach, Florida on Feb. 5th, 2012. But then the fog seems to come alive — it climbs into the sky, swells, and forms a wall. It rushes toward buildings as if it were a wall of water, smashing itself against anything in its way.
This is the second such incident in recent months. In December of last year, something similar was seen in the clouds Alabama. (See video below)
RELATED: GIANT TSUNAMI-SHAPED CLOUDS ROLL ACROSS ALABAMA SKY!
Natalia Jimenez, of MSNBC.com, reports that “helicopter pilot Mike Schaeffer was wrapping up a tour when he spotted this incredible weather phenomenon along the coast of Panama City Beach, Fl. on Sunday.”

As soon as he landed, he alerted Panhandle Helicopter owner JR Hott of the “cloud form waves,” and together they went up for a better view. They moved quickly knowing that it is only in very specific weather conditions that this beautiful effect occurs. While the online community has dubbed this a “cloud tsunami,” Hott disagrees with the popular moniker:
I wouldn’t call it a “cloud tsunami.” The term tsunami implies a natural disaster. The event, while it can form quickly, moves gently and slowly. It isn’t something that happens with more than a gentle breeze.
advertisement
While the images appear non-threatening and peaceful, as an experienced pilot, Hott has been trained to treat all fog and clouds as if they are solid objects. He and Schaeffer were very careful approaching in the air to get a better view. Fortunately, because of the location of the condos, they were able to approach the cloud waves from the side and did not place themselves in the direct path of the fog.

Hott posted the photos to his company’s Facebook page and suddenly he was getting requests for the pictures from all over the world. He is more amazed at the attention his pictures are getting, rather than with the event itself. “This is not so much a study in photography, but a study in how something can go viral,” he told MSNBC.
Meteorologist Dan Satterfield explains this occurrence on his blog:

Cool air offshore was very nearly at the saturation point, with a temperature near 20ºC and a dew point of about 19.5ºC. The air at this temperature can only hold a certain amount of water vapor, and how much it can hold depends heavily on the temperature. If you add more water into the air, a cloud will form, but you can also get a cloud to form by cooling the air. Drop the temperature, and it can no long hold as much water vapor, so some of it will condense out and a cloud will form.