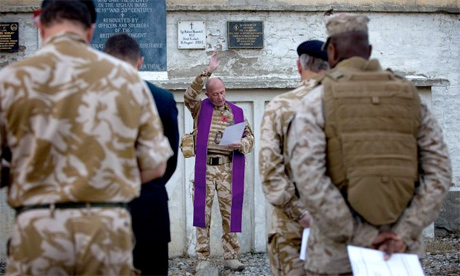 
One of the main news topics this past week involved President Obama’s mandate that Catholic and other religious institutions were required to provide free medical coverage for birth control.
Then the president seemed to offer an olive branch, but upon closer examination the branch turned out to be deadly hemlock and not olive.  He said that the insurance companies would have to provide the free birth control to the employees of religious institutions, which is virtually the same disregard for strong religious beliefs and to many Americans an outright violation of the Frist Amendment.
In all of the news and discussions, no one paid any attention to the effects this was having on our military personnel, especially the chaplains.  The Catholic Church had issued a denomination wide letter in which they informed parishioners that the Church “cannot and will not comply with this unjust law.”
The Army immediately issued orders to all chaplains, especially Catholic chaplains that they are not allowed to read the letter in its entirety and that certain portions of it are to be blacked out and not read aloud.  Former Navy chaplain Gordon Klingenschmitt said,

“The secretary of the Army said you have to line out some of the language, or else we’re going to charge the chaplains with sedition and treason for opposing the Obama administration.  Can you believe this? They are actually threatening chaplains with court-martial if they dare to preach against sin in their own church.”

First the Pentagon tells all chaplains that they are required to ignore their religious beliefs and perform same-sex marriages or unions for military personnel requesting such services.  Then they told all military chaplains that they had to make their facilities available for same-sex union ceremonies.
Klingenschmitt reports that he was literally forced to resign his commission as a Navy chaplain after he had prayed publicly in the name of Jesus while wearing his Navy uniform.
Now the Pentagon is telling chaplains that they cannot preach against mandated birth control coverage or the sanctity of life without facing the serious charges of sedition and treason.
If Obama is re-elected in November, I would not be surprised to see his administration force all Christian chaplains to never mention anything about the Bible, Jesus Christ or preach against any sin.  They’ll be turned into nothing more than secular counselors.  But Muslim chaplains will be allowed to speak of Allah and publicly pray to Allah aloud.
Email Post