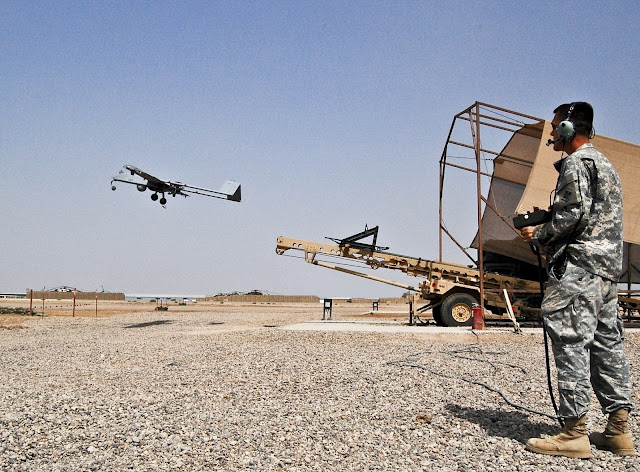 Fox News is reporting 30,000 drones by 2015, not 2020 as this article says. Whichever it is, this is not good news, despite the fact that this will be sold to American's as a good thing, but why do we need this? 30,000 are you kidding me?  That is 600 per state? Folks, let's not forget the government already has the technology to make drones to be the size of a bird.  Sadly most of America will support this, to their own demise. -W.E.


Congress passed a bill this week that has privacy advocates very concerned. The bill, FAA Air Transportation Modernization and Safety Improvement Act, permits the federal government to fly unmanned spy planes, known as drones, in domestic airspace for surveillance purposes. The FAA projects 30,000 drones will be flying around America and gathering information by 2020.
Drones have been used extensively in the War on Terror; they have been utilized in overseas missions, like in the CIA's predator-drone program that targets and kills terrorists, as well as surveillance missions. Drones can be as small as model aircraft or have the wingspan of a full-size jet and are operated remotely by pilots.
According to a Washington Times article yesterday, an agency within the U.S. Customs and Border Protection department currently operates nine drones, which are variants of the CIA's Predator, and uses them primarily for border and counternarcotics surveillance. The FAA has issued hundreds of certificates to police and other government agencies, and a handful to research institutions to allow them to fly drones of various kinds over the United States for particular missions.
This new bill, which has already passed the House and the Senate and is expected to be signed into law by President Obama this week, will drastically expand the use of drones in domestic airspace. It requires the FAA to develop a plan to integrate drones into the national airspace system by the end of the year. The cost, according to govtrack, is estimated to be $34 billion.
Surveillance will not be the only goal. Steven Aftergood, who heads the Project on Government Secrecy at the Federation of American Scientists told Washington Times that Homeland Security has deployed drones to support disaster relief operations. Unmanned aircraft also could be useful for fighting fires or finding missing climbers or hikers, he added.
However, privacy advocates say the measure will lead to widespread use of drones for electronic surveillance by police agencies across the country and eventually by private companies as well. Jay Stanley of the ACLU warned,

Unfortunately, nothing in the bill would address the very serious privacy issues raised by drone aircraft. This bill would push the nation willy-nilly toward an era of aerial surveillance without any steps to protect the traditional privacy that Americans have always enjoyed and expected.

We don’t want to wonder, every time we step out our front door, whether some eye in the sky is watching our every move.

The bottom line is: domestic drones are potentially extremely powerful surveillance tools, and that power — like all government power — needs to be subject to checks and balances. We hope that Congress will carefully consider the privacy implications that this technology can lead to.

The NDAA, signed into law on December 31, called for six drone test ranges to be operational within 6 months from the date it was signed. The NDAA, is more well-known, of course, for its controversial provision that grants the president authority to detain U.S. citizens suspected of terrorism indefinitely, without charge or trial.
2012 has just begun, but has already seen several controversial bills being pushed by Congress: NDAA, SOPA, EEA, and now the new FAA bill have many people unsure if government's goal is really to protect American citizens.
Ben Jenkins, a graphic designer from Orem, Utah, reacted to the FAA bill, telling Examiner,

Whether intentional or coincidental, the recent appearance of so many liberty killing laws is frustrating and scary. So many of these laws rely on a naive belief from the American people that our government will be benevolent with these additional powers. But if history has taught us anything, it's that governments abuse their powers. We must be vigilant in protecting our freedoms and identifying and enforcing the limits placed on government by our Constitution.

In Utah, every representative, except for one, Senator Mike Lee, voted for this bill (Hatch did not vote). Jacqueline Smith, who is running against Rep. Rob Bishop in this year's congressional race, told Examiner today,

It feels like we are living in Orwell's 1984 with these kinds of measures. Government has way over-stepped its bounds. I would have stood with Mike Lee on this one. He is for a Constitutional government that holds government down by the document that created it. The people and the states created our Federal government, but they continue to have sweeping overreaching powers in the name of security. I believe Franklin when he said, "If we give up essential liberty for temporary safety, we will have neither liberty nor safety."

If you have concerns about this bill, find out how your senators voted. For House representatives, click here.