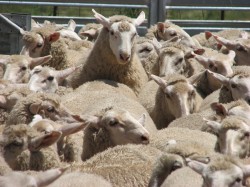 The Dow has closed above 13,000 for the first time since 2008, and the mainstream media is declaring that a strong economic recovery is underway.  Barack Obama is telling anyone who will listen that his economic policies are a huge success, and U.S. consumers are piling up astounding amounts of new debt.


Unfortunately, this euphoria about the economy will be short-lived.  None of the long-term problems that are destroying the U.S. economy have been solved.  In fact, there are dozens of statistics that can be quoted that prove that the U.S. economy is in far worse shape than it was when the recession supposedly ended.  If dramatic changes are not made very rapidly, our nation is going to smash directly into an economic brick wall.  Sadly, most Americans are so addicted to entertainment that they have no idea what is about to happen.  Most of them are "sheeple" that are content to trust that the "experts" know exactly how to fix our problems as they continue to enjoy their entertainment-induced comas.  After all, it is much easier to turn on "American Idol" or "Dancing With The Stars" than it is to think about debt ratios and monetary policy.  But that doesn't mean that we should not try to wake the sheeple up.  It just means that it will not be easy.
If you went to the doctor tomorrow and he told you to take some little blue pills without telling you anything else, would you take them?
Of course not.
You would want to know what the little blue pills are for.
But if your doctor told you that you have a deadly incurable disease that is about to kill you, and that the little blue pills are the only cure, then you would definitely be interested in taking them.
Well, it is the same way with the American people.  Until they understand just how sick the economy is, they will not be interested in fighting for a solution.
We need to show all the sheeple out there that the U.S. economy has terminal cancer and is headed for death.
We need to show them that the future of our children and our grandchildren is literally being destroyed.
Way too many Americans are sitting around waiting for the government to save them.
It isn't going to happen.
It is up to those of us that are awake to wake up those that are asleep.
And there are many out there that think that they are awake that are only partially awake.
One very famous author once wrote that "people are destroyed for lack of knowledge", and that is exactly what is happening in America today.  Most Americans simply don't understand what is happening economically, politically, socially, morally or financially in this nation.
Please help me wake the sheeple up.
The following are 20 economic statistics to use to wake sheeple up from their entertainment-induced comas....
#1 The United States has more government debt per capita than Greece, Portugal, Italy, Ireland or Spain.
#2 The European Commission has formally declared that Europe has now entered another recession.  German banks are leveraged 32 to 1 and the European financial system is rapidly approaching a nightmare.  Lehman Brothers was only leveraged 30 to 1 when it finally collapsed.
#3 There are clear signs that economic activity is also significantly slowing down in the United States.  For example, new orders for goods manufactured in the United States experienced the biggest drop in three years in January.
#4 U.S. consumers are busy racking up staggering amounts of debt once again.  Total consumer debt rose at an annual rate of 9.3 percent in December.  It is now sitting at a grand total of 2.498 trillion dollars.
#5 The U.S. Postal Service has announced plans to eliminate 35,000 more jobs.
#6 There are more unemployed Americans than there are people living in the entire nation of Greece.
#7 The percentage of American men that have jobs is near an all-time record low.
#8 Right now, there are 88 million working age Americans that do not have jobs and that the government says are not looking for jobs.
#9 The average duration of unemployment in the United States is nearly three times as long as it was back in the year 2000.
#10 In January 2009, there were 2.6 million "long-term unemployed workers" according to the federal government.  Today, there are 5.6 million.
#11 The average price of a gallon of gasoline in the United States has risen by 14 cents in just the past week, and the average price of a gallon of gasoline in the state of California is now an astounding $4.29.  Sadly, the price of gas is expected to continue rising over the next few months.
#12 The U.S. housing market continues to struggle deeply.  Home prices in the 4th quarter of 2011 were four percent lower than they were during the 4th quarter of 2010.  Overall, U.S. home prices are 34 percent lower than they were back at the peak of the housing bubble.
#13 Large numbers of Americans are putting off basic health procedures due to the declining economy.  Just consider the following example from a recent Huffington Post article....

Americans between the ages of 50 to 64 got 500,000 fewer colonoscopies, or screenings aimed at detecting colon cancer, during the recession, compared to the two years before, according to a recent study from researchers at the University of North Carolina's medical school.

#14 The number of Americans on food stamps has increased by almost 50 percent since Barack Obama first took office.
#15 Right now, 48 percent of all Americans are considered to be either "low income" or "living in poverty".
#16 The U.S. government is stealing about 150 million dollars from our children and our grandchildren every single hour of every single day.
#17 If Bill Gates gave all of his money to the U.S. government, it would only cover the U.S. budget deficit for about 15 days.
#18 Since the Federal Reserve was created, the U.S. dollar has declined in value by more than 95 percent and the U.S. national debt has gotten more than 5000 times larger.
#19 Approximately 25 million American adults are living with their parents.  Most of them are doing it for economic reasons.
#20 According to a new Politico poll, only 30 percent of all Americans believe that the next generation will be "better off economically" than the previous generation.
For many more current statistics about the U.S. economy, check out the interesting facts which I documented in this previous article.
Thankfully, there are others out there such as trends researcher Gerald Celente that are tirelessly working to sound the alarm.  Celente is convinced that the U.S. financial system is rapidly heading for a disaster.  Just consider the following quotes from Celente in a recent USA Today article....

"2012 is when many of the long-simmering socioeconomic and political trends that we have been forecasting and tracking will climax," Celente noted in his Top 12 Trends 2012 newsletter. In an interview he added: "When money stops flowing to the man on the street, blood starts flowing in the street."

Even some politicians on the state level are deeply concerned about the possibility of a massive financial meltdown.
For example, a bill has been introduced in Wyoming that would set up "a state-run government continuity task force" which would develop plans for how Wyoming would deal with potential disasters such as a "complete meltdown of the federal government", an economic collapse or a major disruption in food and energy supplies....

State Rep. David Miller, R-Riverton, has seen the national debt rise above $15 trillion and protest movements grow around the country. Wealthy Americans are fleeing the country, he says, and confidence in the dollar has taken a hit around the world.
If America’s economic and social problems continue to escalate and spiral out of control, Miller said, Wyoming needs to be ready. So, he’s introduced legislation to create a state-run government continuity task force, which would study and prepare Wyoming for potential catastrophes, from disruptions in food and energy supplies to a complete meltdown of the federal government.
It would even look at the feasibility of quickly providing an alternative currency in Wyoming should the U.S. dollar collapse entirely.

But for many Americans, the "meltdown" has already happened on a personal level.
Many are going to extreme lengths in an attempt to survive in this economy.
For example, one ex-police officer in Ohio got so desperate that he decided that it would be better to get arrested for bank robbery and be thrown in prison than to be homeless and living in the streets....

Former Columbus police officer Edward Pascucci had been jobless for more than a year and was facing homelessness last summer when he decided to rob a local bank. Making off with stacks of cash, however, never was his intention.
Pascucci told a federal judge on Thursday he’d run out of options, was facing “severe health problems” and opted to avail himself of the services offered by the federal penal system rather than live on the street.

Can you imagine that?
Can you imagine getting arrested just so that you could get free health care and wouldn't have to sleep in the streets?
Meanwhile, the Obamas are living the high life and seem to have developed a "let them eat cake" mentality.  The following is from a recent article in The Daily Mail....

The Obama family just finished a luxury ski vacation in Aspen, Colorado. This comes on the heels of a Hawaiian Christmas vacation for the family that lasted a few weeks. The 2011 Hawaiian vacation cost the American taxpayers $4 million and a big increase from the 2010 bill sent to the American people for $2.5 million, according to the Huffington Post.
Over the past three summers, the Obama's have vacationed in the exclusive Blue Heron Farm in Chilmark, Martha's Vineyard in Massachusetts. President Obama has a reputation for hitting every golf course on this island vacation spot for the rich and famous.
There is nothing wrong with a President taking a modest vacation, but there is a problem when the political leader of America is taking frequent swanky vacations when average Americans are experiencing economic pain.

Shouldn't the Obamas be setting an example for the rest of us during these hard economic times?
Unfortunately, Barack Obama seems to believe that the worst of our economic troubles is now behind us.
If only that were true.
During this short-lived bubble of false hope, we should all be working hard to prepare for what is ahead.
A menacing storm is on the horizon and it will be here way too soon.
Let us wake up as many of the sheeple as we can while there is still time.
Email Post