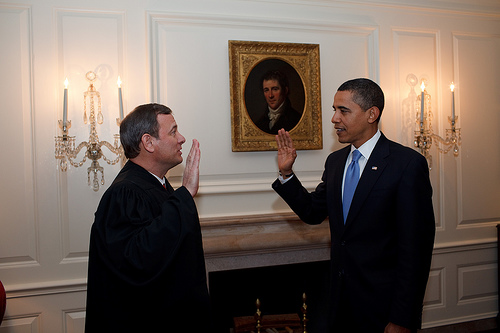 
“This will be the first time ever, since this whole thing began, that it will be looked on, on merit.” Those are the words of Carl Swensson, Republican Party Chairman of Clayton County, Georgia. “This” refers to an actual judicial hearing of the case against the eligibility of Barack Hussein Obama, Jr. to be, according to the United States Constitution, “Commander in Chief” and United States President.
The attorneys of Barack Obama requested a pretrial dismissal, as it had done on so many other occasions, against so many other cases. But yesterday, one judge denied and scheduled an official hearing of the case to commence, January 26.
From 2008 to the present, judicial standing has been refused the plaintiff, often via convoluted rationale, many say sophistry. The question however is elementary to our constitutional republic: can we as Citizens be assured those presented to us for our votes are eligible to hold office?
Unlike many other states, Georgia has a statue requiring just that. For Swensson’s part, he had  “resolved that I would not let anyone on the ballot who is not demonstrably qualified to hold that office.” That would appear to be part of his job as party official and it is the job of Georgia’s Secretary of State, Brian Kemp (R) to assure election law is justly carried out. Swensson relates, “We have been hounding him at hearings he’s been having across the state.”
And so it came to pass that Kemp after some delay, followed due process and called forth the court designated by Georgia law, to hear such a case. This particular case was brought by Swensson and co-litigant, Kevin Richard Powell, attorney: J. Mark Hatfield, judge: Michael M. Malihi.
As veteran Obama eligibility beat reporter Bob Unruh details at WND.com:


While Obama’s attorney, Michael Jablonski, had argued that the requirements didn’t apply to candidates for a presidential primary, the judge said that isn’t how he reads state law.
“Statutory provisions must be read as they are written, and this court finds that the cases cited by [Obama] are not controlling. When the court construes a constitutional or statutory provision, the ‘first step … is to examine the plain statutory language,” the judge wrote. “Section 21-2-1(a) states that ‘every candidate for federal and state office’ must meet the qualifications for holding that particular office, and this court has seen no case law limiting this provision, nor found any language that contains an exception for the office of president or stating that the provision does not apply to the presidential preference primary.”

Swensson and Powell’s is one of three cases, Unruh again:


The decision from Malihi came as a result of a series of complaints that were consolidated by the court. They were brought against Obama’s inclusion on the 2012 election primary ballot by David Farrar, Leah Lax, Cody Judy, Thomas Malaren and Laurie Roth, represented by attorney Orly Taitz; David Weldon represented by attorney Van R. Irion of Liberty Legal Foundation; and Carl Swensson and Kevin Richard Powell, represented by J. Mark Hatfield.

As Sharon Rondeau explains in The Post & Email, standing was even granted the one mere voter’s case. Who would have thought that a Sovereign Citizen (actually, the highest position in the United States of America) would have such authority?


Judge Malihi appeared to support Blanchard’s claim in his decision:
Both the Secretary of State and the electors of Georgia are granted the authority under the Code to challenge the qualifications of a candidate.  The challenge procedures are defined in Code Section 21-2-5(b), which authorizes any elector who is eligible to vote for a candidate to challenge the qualifications of the candidate by filing a written complaint with the Secretary of State within two weeks after the deadline for qualifying.  O.C.G.A. § 21-2-5(b).
A former secretary of state, Karen Handel, utilized the law when she disqualified someone from his candidacy for local office.

This was one of three rulings of Mahili on these matters, yesterday. Another separated these three cases, at the request of the plaintiffs, which he had earlier lumped together into one. Swensson respectfully explained that the integrity of his particular case required separation from the methods of at least one other case’s attorney, Orly Taitz. And as for his own attorney, about their own particulars, “Mark has been doing a Hell of a job.” (statement left unvarnished since the job of doing Hell is one of God’s own works of justice, justice being a blessing we would invoke here).
Yesterday’s remaining ruling denied an early deposition to the plaintiffs, a move which may have brought a sense of bargaining power to the proceedings, when faced up to the Obama request for dismissal. A Super PAC has been formed to provide a modicum of assistance to some of the plaintiffs across the country. Its site, art2superpac.com features all three of Mahili’s rulings.
While the manipulated mainstream media’s “birther” blackout and ridicule campaign is expected to continue, many eyes will focus on Judge Mahili’s court, come January 26. Finally, the definition of Article II’s “natural born Citizen” will be discussed, regarded at the time and upheld by the Supreme Court in Minor v. Happersett, as requiring both of a president’s parents to be U.S. Citizens, by the study of numerous scholars of constitutional language and original intent. (Link – Link)
And the quest for the truth of Barack Obama’s birth certificate will finally be put to the court as well, his Donald Trump induced 2011 submission being deemed a forgery by numerous experts of electronic document renderings. (Web Search Link)
The journey to this milestone has been arduous to the Citizen activists involved and costly to us, the taxpayers, footing Obama’s legal bills. About his own involvement, Swensson relates, “We’ve been in this battle… for three years…”
It is also costly to the pocketbooks of the plaintiffs and their attorneys. After prompting, Swensson further confesses, “I could definitely use the help of like minded patriots who want Obama removed from the ballot, if and only if he is not qualified to be there in the first place.” (Swensson’s site, Rise up for America)
While Gulag Bound will continue to monitor these cases and report on them, for day to day perusal, we also suggest sites including those to which we link, in this and in yesterday’s entry, plus the blog of CDR Charles Kerchner, listed in our sidebar. Another site, obamaballotchallenge.com, also keeps track of this overall effort to maintain America’s integrity by our Constitution.
While on the phone yesterday with Swensson, he was emailed the following graphic, showing the Georgia state flag in a facetious but poignant position. He forwarded that to us.