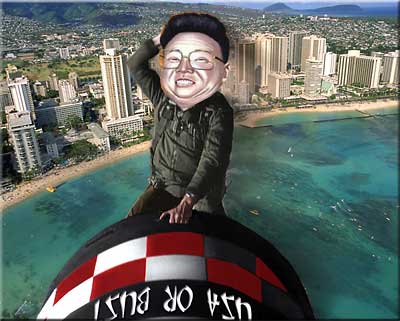 
New intelligence indicates that North Korea is moving ahead with building its first road-mobile intercontinental ballistic missile, an easily hidden weapon capable of hitting the United States, according to Obama administration officials.

The intelligence was revealed in a classified Capitol Hill briefing last month. Its existence was made public in a letter to Defense Secretary Leon E. Panetta from five House Republicans.
“As members of the House Armed Services subcommittee on strategic forces …, we write out of concerns about new intelligence concerning foreign developments in long-range ballistic missile development, specifically ballistic missiles capable of attacking the United States,” the Nov. 17 letter said.
“We believe this new intelligence reiterates the need for the administration to correct its priorities regarding missile defenses, which should have, first and foremost, the missile defense of the homeland.”
Officials familiar with the intelligence said government analysts believe the missile could be a variant of North Korea’s new Musudan intermediate-range missile, first disclosed publicly in October 2010.
Other intelligence indicates that the new ICBM may be under development at a huge missile testing facility on North Korea’s western coast.
Prior to its mobile ICBM, North Korea’s long-range missiles were the pad-launched Taepodong-1 prototype, and the Taepodong-2 (TD-2) dual-use ICBM and space launcher. The TD-2 was test-launched in April 2009.
‘Direct threat’
Mobile missiles are difficult for tracking radar to locate, making them easier to hide. They also can be set up and launched much more quickly than missiles fired from silos or launchpads.
China's military recently deployed two new mobile ICBMs, the DF-31 and DF-31A. It is not known whether North Korea’s new mobile missile is based on Chinese technology. China in the past has provided missile technology to North Korea, a fraternal communist ally.
The first indications of Pyongyang’s new mobile ICBM were made public in June by Robert M. Gates, who was defense secretary at the time.
After a speech in Singapore, Mr. Gates said, “With the continued development of long-range missiles and potentially a road-mobile intercontinental ballistic missile and their continuing development of nuclear weapons, … North Korea is in the process of becoming a direct threat to the United States.”
The new intelligence was discussed during a closed-door briefing in mid-November for the House Armed Services subcommittee on strategic forces and discussed in the letter to Mr. Panetta. The letter did not say specifically that the missile was North Korean, but it quoted Mr. Gates on Pyongyang’s mobile ICBM development.
The letter was signed by Rep. Michael R. Turner, Ohio Republican and chairman of the subcommittee, and subcommittee Republican Reps. Mike Rogers of Alabama, Trent Franks of Arizona, Doug Lamborn of Colorado and Mac Thornberry of Texas.
Congressional aides declined to comment on the intelligence.

Administration officials familiar with the missile data said U.S. intelligence analysts have some disagreement over the developments.
Implications for talks
The intelligence on North Korea’s progress on a mobile ICBM was disclosed as the Obama administration is seeking to restart the failed six-nation talks on North Korea’s nuclear program.
Glyn Davies, special envoy for North Korea, leaves Tuesday for talks in China, Japan and South Korea about North Korea’s nuclear program, the State Department announced Monday.
Last week, North Korea issued a government white paper that defended its April 2009 launch of a Taepodong-2 as part of a satellite development program.
Government analysts viewed the statement as an indication that North Korea may be preparing for a missile flight test.
The United Nations imposed unprecedented sanctions on North Korea after a 2009 test of a nuclear device.
Three paths
Details of North Korea’s first mobile intermediate-range missile, the Musudan, and the new west coast North Korean launch facility were made public in classified State Department cables on the anti-secrecy website WikiLeaks.
A February 2010 cable outlining a U.S.-Russian exchange on missile threats stated that the U.S. government suspects North Korea has three paths to building ICBMs.
One is using the Taepodong-2, with a range of up to 9,300 miles, as its main strategic missile. A second way is to further develop the ranges of existing missiles like the Musudan, and last is to “use the very large launch facility that is being constructed on the west coast of North Korea to launch a very large missile,” the cable said.
The cable said the size of the facility is a concern because “it does not simply replicate other sites.”
“This facility is much larger than the Taepodong launch facility,” the cable said. “This is not to say there is evidence of a new missile system larger than the Taepodong-2 being developed, but it suggests the possibility.”
An Oct. 6, 2009, cable on North Korea’s missile program said the Musudan intermediate-range missile is based on Russia’s SS-N-6 submarine-launched missile that has a range of up to 2,400 miles.
The Musudan uses an advanced liquid propellent called unsymmetrical dimethylhydrazine (UDMH) and nitrogen tetroxide (N204) that are easier to store in missiles.
Story Continues →
Email Post