With the Iran threat growing – as evidenced by the latest IAEA report — it is critical that the Republican presidential candidates explain what they would do differently as Commander-in-Chief from President Obama to neutralize the Iranian threat and support true regime change in Tehran. In nearly every media interview I have done since the publication of my new novel, The Tehran Initiative – as well as in op-eds in the Washington Times and National Review Online — I have been calling on each of the GOP candidates to lay out specific, detailed policies and deliver major foreign policy addresses on this most critical of foreign policy and national security issues.
Here is an assessment of how the candidates are doing so far:
SENATOR RICK SANTORUM — (A+)
Neutralizing the Iran threat and liberating the Iranian people are core conviction issues for Santorum and have been for two decades. Not surprisingly, then, this week  the former Senator became the first (and thus far only) Republican presidential candidate to lay out a serious, detailed, principled plan to neutralize the Iran nuclear threat, encourage the Iranian people to overthrow the evil regime in Tehran, and stand shoulder-to-shoulder with Israel. Santorum is clear that he will put a credible military option on the table and is willing to use force to stop Iran if all other measures fail. At the same time, he puts forward serious measures to attempt to derail nuclear program and promote regime change before war is necessary, including sanctioning Iran’s central bank and oil industry.
Santorum has produced an excellent plan, shows real leadership on the chief national security threat facing the U.S., and becomes the model for other candidates to follow.
Santorum has been good on the Iran issue from the beginning of the campaign and during all the debates. He was particularly resolute on Iran during the CBS News/National Journal debate last Saturday night. “This is the most important national security issue, the Iranian nuke,” Santorum said.  “President Bush and President Obama did not give money to the pro-democracy movement in Iran. Sanctions are not going to be enough. You need to read the IAEA report. We should be working with Israel right now. Take out the nuclear capability. We need to stop this before we have a nuclear explosion in Iran and the world changes.”
Whether Santorum can gain political traction in Iowa or nationally remains to be seen. But one thing is certain: no GOP presidential candidate better understands the Iran threat in the context of the broader Middle East than Santorum. He has a first-rate track record on these issues and has been working on them for decades. Santorum served on the Senate Armed Services Committee for eight years. He was the author of the “Iran Freedom and Support Act,” which he notes “imposed real sanctions on the Iranian regime and authorized $100 million in annual funding for pro-democracy movements within Iran.” Santorum was also the author of the “Syria Accountability Act” to “combat the threat Syria posed to Israel.”
“In 2004, I first authored the Iran Freedom and Support Act (IFSA) – sweeping legislation that funded pro-democracy groups in Iran and imposed real sanctions on this regime aimed at stopping Iran’s nuclear weapons program,” Santorum noted in a recent op-ed. “At first, not a single Democrats or Republicans would join me. That changed in 2005, as it became evident of Iran’s involvement in killing our troops in the region – and I collected 60 co-sponsors. In 2006, Pres. Bush entered into negotiations with Iran – over my strong objections. I brought IFSA to the floor of the Senate for a vote making it clear to the Iranians that Congress was ready to act if the negotiations were unsuccessful. My bill faced opposition from Joe Biden and President Bush and it was narrowly defeated. A few months later, Iranian negotiations broke down and that very same bill was passed unanimously and signed by President Bush.”
Last year, Santorum invited me and several colleagues of mine to discuss the Iran threat, various Israel issues, and to compare notes about the dangerous Shia eschatology held by Iran’s current leaders. I’d always been impressed by the Senator’s conservative convictions on a range of economic and social issues, and his consistent support for Israel, but didn’t know him personally. I walked away very much encouraged during the lunch by his working knowledge of threats posed by Iran, Syria and Radical Islam.
SPEAKER NEWT GINGRICH — (A)
Gingrich has a solid working knowledge of the Iran threat and a seriousness of purpose to neutralize Iran and change the regime in Tehran. He has been a solid friend of Israel. He brings much experience and gravitas to foreign policy and national security issues, and he supported more U.S. funding for covert operations against the Iranian regime as Speaker of the House. Unfortunately, Gingrich did not speak much about the Iran threat earlier in his campaign, and in 2006, Gingrich went on record in opposition to using military force against Iran. 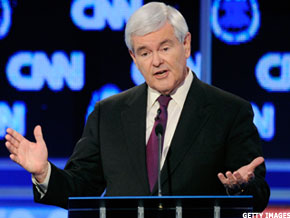 However, to his credit, as the Iran threat has worsened in recent years, Gingrich reevaluated the situation on the ground. In 2010, he warned that Iran was becoming like Nazi Germany in the 1930s and began toughening his stance towards the regime in Tehran. In recent weeks, with revelations about the Iran terror plot and the new IAEA report coming to light, he has spoken out clearly and forcefully about the need to bring down the regime in Tehran and his willingness to use military force against Iran, if needed. He was particularly strong in the CBS News/National Journal debate in South Carolina last Saturday night. “If in the end, despite all of those things, the dictatorship persists, you have to take whatever steps are necessary to break its capacity to have a nuclear weapon,” Gingrich said.
That said, the Speaker needs to put a specific, detailed Iran plan on the table and deliver a major policy address focused on how he would handle the Iran threat.
REP. MICHELE BACHMANN – (A-)

Bachmann has been clear and articulate throughout the campaign on the critical importance of neutralizing the Iran threat, and has been as unequivocally pro-Israel as Santorum and Gingrich. “With a President Bachmann, I can assure you, there would be no option in my cabinet that would be off the table,” the Congresswoman said on November 8. “I would use every possible military option there is to stop Iran from using a nuclear weapon.” Bachmann added that President Barack Obama has “allowed Iran to have the greatest luxury of all: time.”
Bachmann first visited Israel in the summer of 1974. She worked on a kibbutz near Beersheva and has traveled to Israel numerous times since then, always supporting the Jewish State as America’s strongest strategic ally in the Middle East. Bachmann is only in her third term as a Members of the House of Representatives, which does not give her the same depth of experience as Gingrich or Santorum. She is helped, however, by the fact that she sits on the House Intelligence Committee which has given her a good vantage point to gaining valuable insight and experience on foreign policy and national security issues.
That said, the Congresswoman needs to put a specific, detailed Iran plan on the table and deliver a major policy address focused on how she would handle the Iran threat.
GOVERNOR MITT ROMNEY (B)
Romney doesn’t have much foreign policy or national security experience as a businessman or Governor. He didn’t speak much about the Iran issue early on in the campaign. He delivered a major foreign policy address in South Carolina in October but barely touched on Iran and gave no specifics on how he would handle the growing threat from Tehran. However, he has, to his credit, been consistently pro-Israel over the years, so far as I can tell.

That said, the Governor has begun speaking out clearly and articulately on the Iran issue over the past month. He wrote a solid op-ed for the Wall Street Journal analyzing the Iran threat. During the CBS/National Journal debate, he said, “It is unacceptable for Iran to have a nuclear weapon….If all else fails, if after all of the work we’ve done, there’s nothing else we could do besides take military action. Then of course you take military action.” He called for “crippling economic sanctions” against Iran and supported using covert action and supporting the dissidents in Iran who oppose the current regime. He also stated unequivocally, “One thing you can know — and that is if we reelect Barack Obama, Iran will have a nuclear weapon. And if we elect Mitt Romney, if you’d like me as the next president, they will not have a nuclear weapon.”
The problem is that few conservatives have confidence in Romney’s willingness or ability to base his policies on core convictions and to stick to a stated policy position when the political winds shift. He has a disturbing record of flip-flopping on core issues. How, then, would he treat Iran and Israel when the going got tough? What are his true convictions on the issue? All that remains to be seen, and such doubts lower his rating.
The Governor needs to put a specific, detailed Iran plan on the table and deliver a major policy address focused on how she would handle the Iran threat.

ASSESSING THE OTHER GOP CANDIDATES:
In no way are these intended to be endorsements. There are clearly a wide range of issues that need to be assessed, as well as character, experience, etc. That said, I hope this will be a helpful at-a-glance assessment of how the candidates are doing on the Iran issue to date. The next GOP debate — sponsored by The Heritage Foundation, the American Enterprise Institute, and CNN — will focus entirely on foreign policy and national security. It was to air tonight. It has been rescheduled for November 22.
Email Post