Want a RFID Chip In Your Pants? No? Well They’re Coming Anyway


Here’s an article from the BBC that (enthusiastically) announces the insertion of RFID chips in many everyday products like jeans, foods or cars, allowing the constant monitoring of pretty much everything. Sure, the article “addresses” privacy concerns (mostly downplays them) but it mainly sells RFIDs with arguments like “it could save the lives of old people stuck in a building on fire”. Most people find that inserting computer chips that can connect to the internet with personal data completely useless and, frankly, creepy. Despite this fact, there is a huge push to promote these chips and to sell them to the public.


So, here’s what the article says: Do you want old people to die in a fire? No? Well, put a RFID chip in your pants. I’m exaggerating here but, sadly, not really.

Internet of things: Should you worry if your jeans go smart?

What if those new jeans you’ve just bought start tweeting about your location as you cross London Bridge?
It sounds far-fetched, but it’s possible – if one of your garments is equipped with a tiny radio-frequency identification device (RFID), your location could be revealed without you knowing about it.
RFIDs are chips that use radio waves to send data to a reader – which in turn can be connected to the web.

This technology is just one of the current ways of allowing physical objects to go online – a concept dubbed the “internet of things”, which industry insiders have shortened to IoT.
This is when not only your PC, tablet and smartphone can connect to the web, but also your car, your home, your baseball cap and even the sheep and cows on a farm.
And as we switch from IPv4 towards IPv6, which will support some 340 trillion trillion trillion addresses, more and more objects will jump into the web.
Smart buildings and intelligent cars with assigned IP addresses are already making cities smarter – and soon enough, the entire planet may follow.
“A typical city of the future in a full IoT situation could be a matrix-like place with smart cameras everywhere, detectors and non-invasive neurosensors scanning your brain for over-activity in every street,” says Rob van Kranenburg, a member of the European Commission’s IoT expert group. 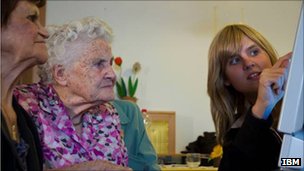 In Italy, a group of elderly people have had
sensors placed at their homes for remote
monitoring
This vision might still be years off, but one by one, “smarter” cities are beginning to crop up around our landscape.
Endless opportunities
IoT advocates claim that overall interconnectivity would allow us to locate and monitor everything, everywhere and at any time.
“Imagine a smart building where a manager can know how many people are inside just by which rooms are reflecting motion – for instance, via motion-sensitive lights,” says Constantine Valhouli from the Hammersmith Group, a strategy consulting firm.
“This could help save lives in an emergency.”

But as more objects leak into the digital world, the fine line that separates the benefits of increasingly smart technology and possible privacy concerns becomes really blurred.
“The IoT challenge is likely to grow both in scale and complexity as seven billion humans are expected to coexist with 70 billion machines and perhaps 70,000 billion ‘smart things’, with numbers infiltrating the last redoubts of personal life,” says Gerald Santucci, head of the networked enterprise and RFID unit at the European Commission.
“In such a new context, the ethical worries are manifold: to what extent can surveillance of people be accepted? Which principles should govern the deployment of the IoT?”

Peter Hustinx, European data protection supervisor, says that sometimes firms tend to overlook the importance of personal data.
“In much of the monitoring, tracking and tracing [devices] which are embedded in these facilities, there’s privacy relevance, and it will have to be compliant with the new European Commission Framework,” he says.
The Framework was signed by the European Commission in April 2011, and its main purpose is to safeguard consumer privacy and assure the public that web-connected objects are safe for the industry to develop – and for people to consume.
Take clothing, for instance.
A number of stores, among them major retail chain Wal-Mart, have started using RFID tags to enable employees to quickly check the stock by scanning items on shelves, and to track products more easily from manufacturing to the final delivery.
But privacy advocates are concerned that the same RFID reader could also read the data on, say, a consumer’s passport or driving licence equipped with the same kind of chip – and it could lead to identity theft.
And although the tag is supposed to be removed at the checkout, if a consumer leaves the shop with the chip still attached, the item could be tracked on the street.
Once the tag is thrown away, it can still be scanned, enabling someone to get an idea of your shopping habits.
Hackers also know how to decode RFID tags.
And because the information is transmitted via radio waves, one can simply listen in.
That’s exactly what happened when the Soviets presented a US ambassador during the Cold War with a wooden carving of the Great Seal, bugged with an RFID predecessor – a device called The Thing.
The Americans failed to find it – just like modern RFID tags, it only worked when enabled by a radio wave – which led to the Soviets eavesdropping on the conversations at the ambassador’s office by beaming radio signals to it.

Another way to make things smarter is by embedding sensors in them and sending data online via a wireless low-power technology called Zigbee. 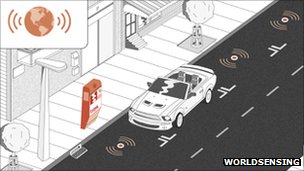 Sensors “tell” the driver where free parking
spaces are
IBM is doing just that – its project that remotely monitors the environment that could affect the health of elderly people in Bolzano, Italy, extended caretaker supervision with sensors embedded all over the patients’ homes, providing round-the-clock peace of mind not only for the patients but for their families too.
The sensors read the levels of carbon monoxide, carbon dioxide, methane, temperature and smoke, and send the information to the caretakers’ PCs and mobile devices.
To protect the patients’ personal data, IBM uses encryption, says Bharat Bedi from the firm’s lab in Hursley, UK.
“And we’ve also added some anonymous features to the system – when you log on to the dashboard, you don’t see the person’s name or their exact address, they’ve been given almost like code names which only mean something to the council workers and the relatives,” he says.
A Spanish company Worldsensing has come up with a similar sensor-based technology.
With help of a special app on your smartphone, drivers can receive data from sensors installed in parking spaces, telling them where the closest free spot is.

“So that no one tries to sneak into your system and steal personal data – such as where you parked and how long you stayed – we use encryption, and also apply a decoupling technique that separates personal information from purely technical data,” says the firm’s chief technical officer, Mischa Dohler.

Cars are rapidly becoming smart, too.
Toyota, for instance, has always been one of the frontrunners in telematics – and now it has decided to team up with Salesforce.com to allow cars to chat to their drivers on a private social network.
The venture, called Toyota Friend, will first work only for hybrid and electric cars. So if the battery is almost flat, for instance, the driver would receive a short message via Bluetooth on his or her smartphone.
In a demonstration at a Tokyo showroom, one of the Toyota owners showed such a message: “The charge will be completed by 2:15 am. Is that OK? See you tomorrow.” 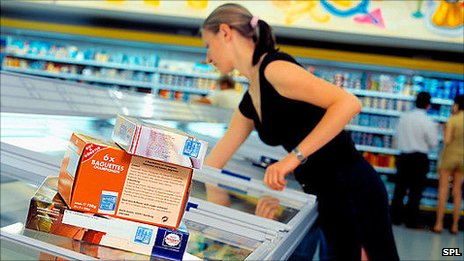 Stores all over the globe are tagging their items with RFID chips
The car will also be able to update its – and hence the driver’s – location.
And it is here that privacy issues may come into play. What if the location is revealed automatically, for instance if the owner forgets to modify the privacy settings, just like on Facebook?
But Salesforce.com’s Tim Barker says that privacy should not be a concern.
“Social Enterprise applications provide customers an opt-in to allow them to share information such as their location and ‘likes’, to enhance their experience as a customer and the information that they receive,” he says.
It is hard to predict how well all these issues will be addressed once the entire planet gets on the web.
But as Mischa Dohler from Worldsensing puts it, in our already digital and high-tech society, the IoT privacy issues have to be taken with a little pinch of salt.
“It’s just like with your phone and a credit card – your mobile phone operator and your bank know much more about your life than your wife or husband does,” he says.
“And this data is likely to be more critical than the type of jeans you wear or for how long you’ve been parked.”
Email Post
Labels: Loss of Liberty Police State Strange