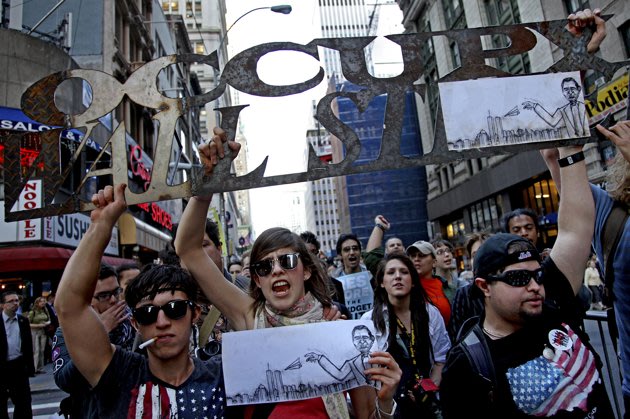 "Don't be jealous, don't be envious," Cain said as he signed copies of his memoir. "I don't have much patience for someone who does not want to achieve their American dream the old-fashioned way."

More than 400 people attended the event. The former head of Godfather's Pizza pulled up in front of the Barnes & Noble bookstore in a black luxury bus, and he entered the store to cheers and applause.

After winning the Sept. 24 straw poll in Florida, Cain has seen his popularity surge, especially among conservatives. He is showing well in many surveys, near front-runner and former Massachusetts Gov. Mitt Romney, who has raised more money.

When asked about the thousands of people that have been protesting in lower Manhattan, Cain said, "They're basically saying that somehow the government is supposed to take from those that have succeeded and give to those who want to protest. He added: "That's not the way America was built."

Cain said people should instead protest the White House and President Barack Obama because the president has not created jobs. Bankers and others on Wall Street have created jobs, he said.

"They're protesting in the wrong place," Cain said. "I'm not sure I know why they're there. If they're there because they are jealous of Wall Street and bankers and people who have succeeded, then they're there for the wrong reasons. This country is based on people who achieve their dreams and work."

He added that the protesters "should go figure out what America is all about."

Romney, who has called the protest "class warfare," brushed aside any talk of the protests during a brief stop in Tallahassee on Wednesday.