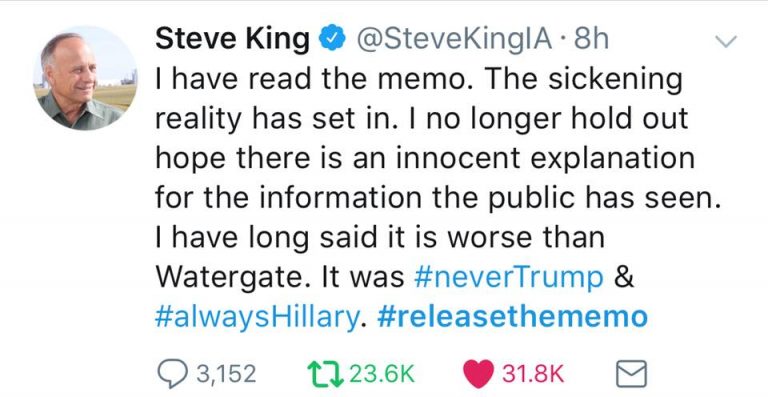 Never before has there been so much talk about a memo in Washington.

In a previous article, I claimed that this could be “the biggest scandal in D.C. since Watergate”, but the truth is that this could actually be bigger than Watergate.  As you will see below, there are some that believe that this memo will implicate members of the previous administration all the way up to Barack Obama himself.  In the short-term, we are likely to see a number of top government officials fired, and even Democrats are admitting that this could include Deputy Attorney General Rod Rosenstein and Special Counsel Robert Mueller.  The following comes from Reuters…

The top Democrat on the U.S. House of Representatives Intelligence Committee said on Wednesday a memo by the panel’s Republicans opens the door for the White House to fire the special counsel probing Russia’s alleged meddling in the U.S. election or the No. 2 official at the Justice Department.
“It … increases the risk of a constitutional crisis by setting the stage for subsequent actions by the White House to fire (Special Counsel Robert) Mueller or, as now seems more likely, Deputy Attorney General Rod J. Rosenstein,” Representative Adam Schiff said in an opinion piece in the Washington Post.

But if this memo is as damning as some believe that it will be, getting fired will not be the end of the story for many of these top officials.

If it is true that government surveillance powers were illegally used to target Donald Trump and his associates, and if it is true that the Obama administration, the FBI and the Clinton campaign illegally colluded in a desperate attempt to destroy Donald Trump, we should be seeing a lot of really big names go to prison.

In a previous article, I discussed how outraged many Republican members of Congress were after they initially read this memo.  Since that time, we have learned that current FBI Director Christopher Wray was “shocked to the core” after reading the four-page FISA abuse memo, and that he immediately asked Andrew McCabe to resign the next day…

Carter: What we know tonight is that FBI Director Christopher Wray went Sunday and reviewed the four-page FISA memo. The very next day, Andrew McCabe was asked to resign. Remember Sean, he was planning on resigning in March – that already came out in December. This time they asked him to go right away. You’re not coming into the office. I’ve heard rep[orts he didn’t even come in for the morning meeting – that he didn’t show up.

Hannity: A source of mine told me tonight that when Wray read this, it shocked him to his core.

Personally, I have been very vocal about the need to release this memo, and I don’t know why any of my opponents don’t seem to want to speak out publicly about this.  Maybe they have been and I have just not seen it yet.  So if any of you know of any public statements by my opponents on this matter please let me know.

As I stated during the recent candidate debate, I am not going to shy away from the hard issues, and that definitely sets our campaign apart from the exceedingly bland campaigns of my opponents.
The good news is that it looks like this memo may be on the verge of being released.  According to Zero Hedge, President Trump appeared to tell a member of Congress that he was on board with releasing the memo as he was leaving the State of the Union address…

It appears President Trump has managed to set another narrative as he left the House Chamber.

As Trump shook hands up the aisle after his SOTU address, Rep. Jeff Duncan called out to Trump, asking him “Let’s release the memo,” referring to the House Intelligence Committee’s FISA memo.

Because this memo could potentially end the Special Counsel’s investigation, it would definitely make sense for Trump to release it.

And because this memo could be such a disaster for Democrats, it also makes sense why they are vehemently opposing any effort to make it public.

If it was just embarrassing that would be one thing.  Unfortunately, it appears that this memo is going to implicate many of the biggest names in the Democratic Party including Barack Obama.  Just consider what former Secret Service agent Dan Bongino is saying…

Dan Bongino: It is not a coincidence that Devin Nunes who has an entire scope of what happened went back in March to the White House facility to read very specific intel that I think will very likely be in this memo. What am I saying by this? That the information was likely breached to Barack Obama. What does that mean? That means that this information was being used by Hillary and all of this other stuff that was in this dossier and all of this spying was probably being inserted into daily briefs by Barack Obama. Why else would Nunes have to go to the White House to read it.


We shouldn’t be too optimistic until we actually get to see the memo, but many are hoping that this could be the trigger that leads to a true “draining of the swamp” in Washington.

The rule of law should apply to everyone, and that includes our elected officials.  It appears that there has been a great deal of malfeasance going on behind the scenes, and it will be a great win for the American people if we can start to expose it for all the world to see.


Michael Snyder is a pro-Trump candidate for Congress in Idaho’s First Congressional District, and you can learn how you can get involved in the campaign on his official website. His new book entitled “Living A Life That Really Matters” is available in paperback and for the Kindle on Amazon.com.
Email Post
Labels: #ReleaseTheMemo Crooked Hillary Mueller Russia Collusion-Gate War on Trump