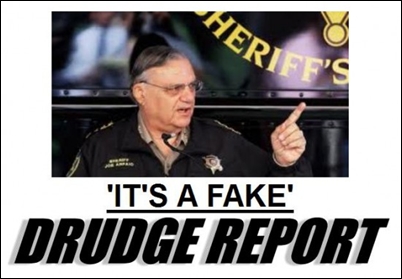 
Defiant and reflective, 80-year-old Maricopa County, Arizona Sheriff Joe Arpaio told Breitbart News after winning re-election that he has a message for President Barack Obama: granting amnesty to illegal immigrants is unfair to legal immigrants.
And Arpaio would like to discuss amnesty -- along with border security issues -- with Obama “man to man” directly at the White House. He would also like to reach out to Hispanic groups he said have misunderstood his intentions and bought into the negative “propaganda” about him.

“I wish the president would invite me to the White House,” Arpaio told Breitbart News. “We’ll have some wine and beer, and light up cigars.”

When it comes to potential amnesty provisions being discussed in Washington, Arpaio said he is against amnesty because, to him, it is a fairness issue the elite media and career politicians in Washington do not understand.

“It's a fairness issue, nobody thinks about that,” Arpaio said. “Why should we reward people who come here illegally?” Arpaio noted that “everybody around the world is waiting for years to come here” and “they don’t all come sneaking in.” “I'm an old-time guy, I just use common sense,” Arpaio said.
Arpaio said he wanted to talk “man to man” with Obama, whose administration recently accused him of a “pattern” of misconduct that violated the civil rights of Hispanics in Maricopa County and sued him for what Arpaio says was his merely following the immigration enforcement laws that were on the books.
Arapaio insists he was just enforcing Arizona’s S.B. 1070 immigration law, which requires officers -- after detaining individuals for other crimes -- to ask those who they reasonably suspect may be illegal immigrants for documentation. The Supreme Court upheld this particular provision, which the left calls the “papers, please” provision. And a majority of Americans, as a Breitbart News/Judicial Watch Election Night exit poll found, favor Arizona-style immigration laws.

Arpaio wants politicians to quit saying they “must secure the border first”  before discussing other immigration issues, because he sees those words as code words to punt on issues in the interior that are just as important. “They’ll never secure the border 100 percent,” Arpaio said. “So it’s a cop-out so you don’t do anything in the interior.”
Since Arpaio first got elected in 1993, he has been reviled by the left, he says, for just doing his job and enforcing the law in the interior. And this year, he had to raise over $8 million dollars to ward off an organized effort on the left to get former Phoenix police Sgt. Paul Penzone to defeat him. “They tried to destroy me,” said Arpaio, who won with 53% of the vote. “The more they go after me, the more I fight. I'm still standing.”

The American Civil Liberties Union (ACLU) also sued Arpaio and Maricopa County, accusing Arpaio of violating the Fourth Amendment in his “zeal to rid the community of persons that it believes are undocumented immigrants.” Arpaio said he is “not going to surrender to the ACLU” even though they -- and groups on the left -- “really went after me this election cycle.”

Arpaio said part of the reason why the left reviles him is because they think he is prejudiced against his inmates. Arpaio acknowledged that he does things differently, but it is for “deterrence” and not “to be mean.”
He said he wanted potential criminals to see his chain gangs and not ever want to come to his jails. And he wants his inmates to not want to come to his jails again. "If they don’t like it, don’t come back to my jails,” Arpaio said.

He noted many of his arrests are for drug offenses, stolen identification, and he takes people off the street that could harm people in the Hispanic community. He also said that he harshly deals with those who are found to have abused their dogs or cats.

Arpaio said much of this has been lost amidst the “propaganda” against him, and so he would like to make concerted efforts to reach out to the Hispanic community to engage in dialogue these next four years.

Known for his tent-city jails, putting inmates in pink jumpsuits and underwear, and ferociously enforcing immigration laws that are on the books, Arpaio said he has discovered recently he could get more done through constructive dialogue than through bluster. And that will be one of his major goals the next four years.
He noted he discussed border security issues over blueberry pie and whiskey with Mexico’s president and attorney general, and he would also like to do the same with members of the Hispanic community whom he says have misunderstood his intentions by believing all of the “propaganda” about him. “I got more done with blueberry pie than a big stick,” Arpaio said.

And he insists he could have productive discussions with Obama. “I won’t even ask you for your birth certificate,” Arpaio quipped, of Obama.

And for those hoping Arpaio will leave the stage, Arpaio said to not even think about it. He has already decided to run for reelection in 2016, and he says the “age issue” is not going to work. Arpaio said his opponents threw the age card at him but it did not matter to voters. “I'm a senior citizen, and I'm proud of it,” Arpaio said.

Arpaio said he wanted to announce he would be seeking another term so his opponents did not view him as a lame duck. “I won’t be a lame duck. I’m not going anywhere,” Arpaio said. “I’m a fighter.”
Email Post
Labels: Infiltrated Nation