Homeland Security Wants to More Than Double Its Predator Drone Fleet Inside the US, Despite Safety and Privacy Concerns Via the Daily Sheeple:

In reality, this bill serves to decimate the US Constitution, negate the 10th Amendment, and infringe upon local, county, and state jurisdiction by giving 100 miles of land adjacent to any international border directly to Homeland Security without any recourse or oversight.
Section 2, (b) (1)
Authorized Activities of U.S. Customs and Border Protection-
(A) Construction and maintenance of roads.
(B) Construction and maintenance of fences.
(C) Use vehicles to patrol.
(D) Installation, maintenance, and operation of surveillance equipment and sensors.
(E) Use of aircraft. (Drones, or Unmanned Aerial Vehicles)
(F) Deployment of temporary tactical infrastructure, including forward operating bases.
Forward operating bases?  Is DHS expecting warfare or armed conflict at one of our borders?
While 100 miles might not seem like a lot to some people, have a look at this map and judge for yourself. The red zones serve as an approximation of the land areas that will come under Homeland Security control to do as they please.  You’ll notice that the entire states of Florida and Hawaii are covered, and this map fails to account for international “borders” and “zones” surrounding the United Nations building in New York City, consulates, embassies, or any “international trade zones” throughout the country. 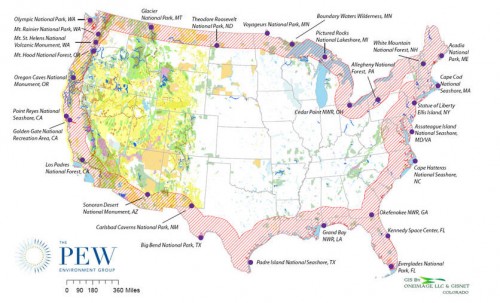 What happens to the sovereignty of these jurisdictions when they must answer to the Secretary of Homeland Security?  And as we all know, DHS is not merely Border Patrol.
DHS is actually seven agencies wrapped into one:
1. TSA—Transportation Security Administration
2. CBP—US Customs and Border Protection
3. CIS—US Citizenship and Immigration Services
4. ICE—US Immigration and Customs Enforcement
↑ HSI – Homeland Security Investigations
5. SS—US Secret Service
6. FEMA—Federal Emergency Management Agency
7. USCG—US Coast Guard 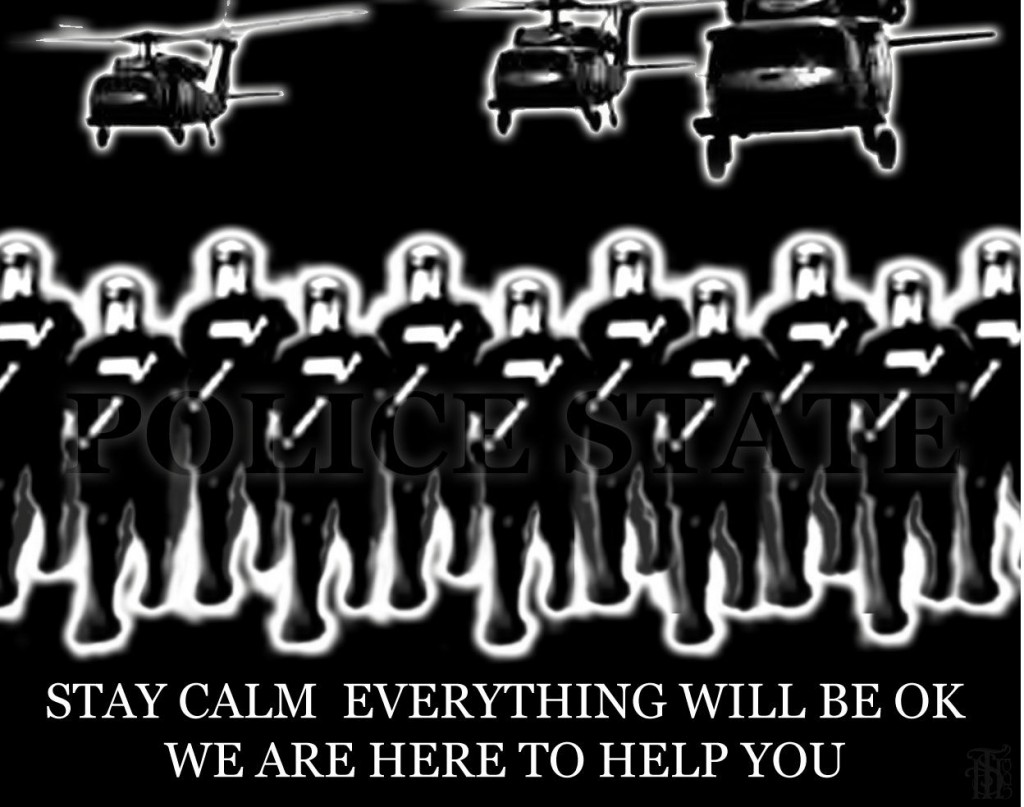 Despite renewed criticism from both parties in Congress that domestic drones pose a privacy danger to US citizens—and a report from its own Inspector General recommending to stop buying them—the Department of Homeland Security (DHS) has indicated it wants to more than double its fleet of Predator drones used to fly surveillance missions inside the United States.
Yesterday, California Watch reported that DHS signed a contract that could be worth as much as $443 million with General Atomics for the purchase up to fourteen additional Predator drones to fly near the border of Mexico and Canada. Congress would still need to appropriate the funds, but if they did, DHS' drone fleet would increase to twenty-four.

While many people may think the US only flies Predator drones overseas, DHS has already spent $250 million over the last six years on ten surveillance Predators of its own. Customs and Border Protection (CBP)—a division of DHS—uses the unmanned drones inside the U.S. to patrol the borders with surveillance equipment like video cameras, infrared cameras, heat sensors, and radar.

They say the drones are vital in the fight to stop illegal immigrants, but as EFF reported in June, the DHS Inspector General issued a report faulting DHS for wasting time, money, and resources using drones that were ineffective and lacked oversight. The Inspector General chastised the agency for buying two drones last year despite knowing these problems and recommended they cease buying them until the problems could be fixed.

Perhaps worse, DHS is also flying Predator drone missions on behalf of a diverse group of local, state, and federal law enforcement agencies for missions beyond immigration issues. We know they have lent the drones out to the county sheriff's department in North Dakota and the Texas Rangers, among others, but unfortunately, we don’t know the full extent DHS lending program. DHS, as is their custom, is keeping that information secret. In response, last month EFF sued DHS under the Freedom of Information Act demanding answers about how and why it loans out its Predator drones to other law enforcement agencies across the country. EFF's lawsuit asks for the records and logs of CBP drone flights conducted in conjunction with other agencies.

These drones pose a multitude of privacy concerns to all Americans, as the Congressional Research Service (Congress’ non-partisan research arm) detailed in this comprehensive report on domestic drones and the Fourth Amendment. The report explains drones can be equipped with, among other capabilities, facial recognition technology, fake cell phone towers to intercept phone calls, texts and GPS locations, and in a few years, will even be able to see through walls. Despite these concerns, DHS has not publicly issued any privacy rules to make sure drones do not spy on US residents in border states going about their daily lives. In fact, at a Congressional hearing on the subject, DHS refused to send anyone to testify, leading both parties to criticize their absence.

This is even more troubling given DHS is also leading the push to get local police agencies to purchase their own drones by handing out $4 million to agencies to “facilitate and accelerate” their use. The FAA estimates as many as 30,000 drones could be flying over US territory by the end of the decade.

The booming drone industry, which has announced a PR campaign in an attempt tamp down the public’s privacy concerns, is quick to point out that these police drones—which cost anywhere from under $100,000 to $1 million—are smaller than Predators and do not have the same flight time, so police would not be able to surveil Americans for hours or days at a time like Predator drones could.

Yet as the technology advances rapidly and becomes cheaper every year, smaller drones will soon be able to fly for an extended time period as well.

For example, Lockheed Martin has developed a drone that weighs only 13.2 pounds, well within the FAA’s domestic weight limits, and can be recharged by a laser on the ground, allowing it remain in the air indefinitely.

Several members of Congress have commendably introduced bills that would protect the privacy of Americans and increase transparency surrounding their use. These members, who voted for increased drone use in February but have recently expressed second thoughts, should call DHS representatives before Congress to explain their position. The American people deserve answers about to whom Homeland Security is loaning its drones, how DHS plans on protecting Americans’ privacy, and why they even need any more, given they are misusing the drones they already have.
Email Post
Labels: Agenda 21 Big Brother Drones Infiltrated Nation Police State