Voter Integrity Project has no evidence of any ballots cast in their names.
A Raleigh-based group devoted to reducing the potential for voter fraud presented the N.C. Board of Elections on Friday with a list of nearly 30,000 names of dead people statewide who are still registered to vote.
The Voter Integrity Project compiled the list after obtaining death records from the state Department of Public Health from 2002 to March 31 and comparing them to the voter rolls.
“Mainly, what we’re concerned about is the potential [for fraud],” said project director Jay DeLancy. “Since there is no voter ID law in North Carolina, anybody can walk in and claim to be anyone else.”
DeLancy said his group has found evidence to suggest voter fraud in these numbers, but will not quantify how much until he is able to do more analysis. Most cases of what look like a dead person voting are likely just administrative errors, such as a son named Junior voting in his father’s name instead of his own.
The rolls of registered voters are updated every month when the state Department of Health and Human Services gives a list of all death certificates received that month to the state Board of Elections.
Problems arise when the names on the death certificates do not match the names on the voting records, which often happens after women get married, Board of Elections General Counsel Don Wright said Friday. Addresses are also often listed with slight differences, Wright said. An address on West Millbrook Road and Millbrook Road might be the same house, but computers won’t always catch it. “Unless there is an exact match, we do not remove people from the voter rolls,” Wright said.
DeLancy said his volunteers work to fix the discrepancies, by examining cases of similar names and addresses and confirming other pieces of data, such as whether the voter has the same date of birth.
Wright said the elections board will investigate the names provided by the Voter Integrity Project and take appropriate action. The state board can remove voters from the rolls for inactivity if they haven’t voted in two consecutive elections, which cleans up most problems over time, Wright said.
In 2009, 261 cases of voter fraud were sent to local district attorney’s offices in the state, the majority of which concluded investigations from the 2008 election, according to a report by the state Board of Elections. Of those cases, 229 involved convicted felons voting. The board did not investigate anyone for fraud in the May primaries, Wright said. 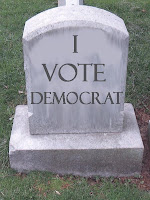 DeLancy says his group’s list of dead registered voters would have been larger had it included records from Virginia and South Carolina, which together account for 55 percent of all North Carolinians’ out-of-state deaths, he said. Although most states allow the release of death certificates for voter registration accuracy, Virginia and South Carolina do not, DeLancy said.
“We said, ‘Are you kidding? This is 2012.’ ” DeLancy said. “We want Virginia and South Carolina to fix that loophole in the law.”
The Voter Integrity Project describes itself as a nonpartisan group aimed at clean, fair elections. It supports requiring photo ID to vote, which Republicans typically support and Democrats typically oppose.
Earlier this summer, the organization sued to have 528 Wake County residents it claimed were not U.S. citizens removed from the voter registration. The county elections board investigated the complaint and found that all of the voters were citizens and eligible to vote.