SURE NAPOLITANO-ARIZONA BORDERS ARE SECURE!!!

From the email file: h/t better keep it annonymous, but you know who you are!- Thanks for the emails everyone!


IF THIS BOTHERS YOU AS IT DID ME, PLEASE PASS IT ON-PARTICULARLY TO SHERIFFS OR OTHER LAW ENFORCEMENT!

This is the 2nd raid this year  this one took place on 3/2/12 at 3 am  Border Patrol, USA  Mexican Patrol and AZ swat teams and Sheriff undercover agents.  I worked with one of the agents Dad for 25+ years and he sent these pictures this afternoon.  2 of the stolen SUV's came from Calif.

Anybody want to boycott Arizona ? Why was there no news coverage of this raid on the Arizona border???
Not a mention on ABC - CBS - NBC - MSNBC - or CNN news!
These photos and reports come from a Spanish language news source.
Thank God for the border patrol and that they did not allow this to get in.
Stash of assault rifles.  (Grenade Launchers in pix center!) 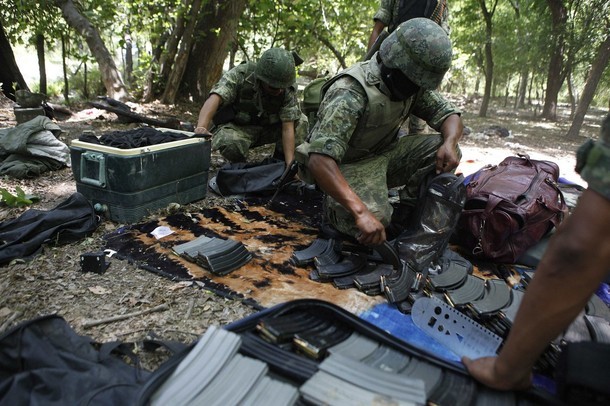 Enough ammunition to outfit a small army was confiscated.

Military caps and equipment were among the cache of weapons.

All types of assault weapons were among the cache 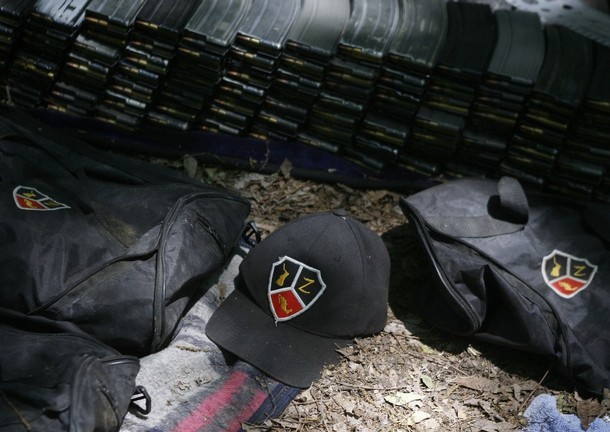 Many were military grade weapons with plenty of ammo. 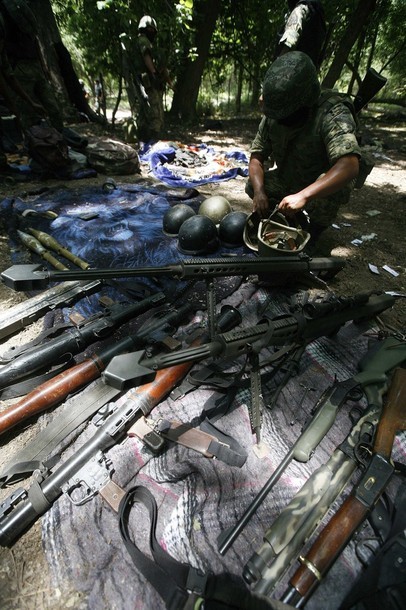 There were enough guns to open a gun shop. 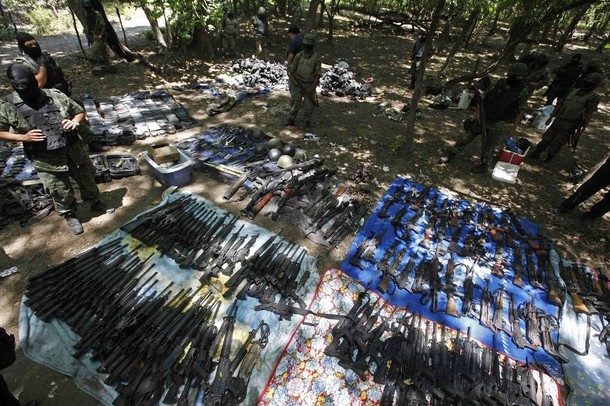 It was a major asenal of weapons including grenade launchers.
(Seen a little to the right of center picture.) 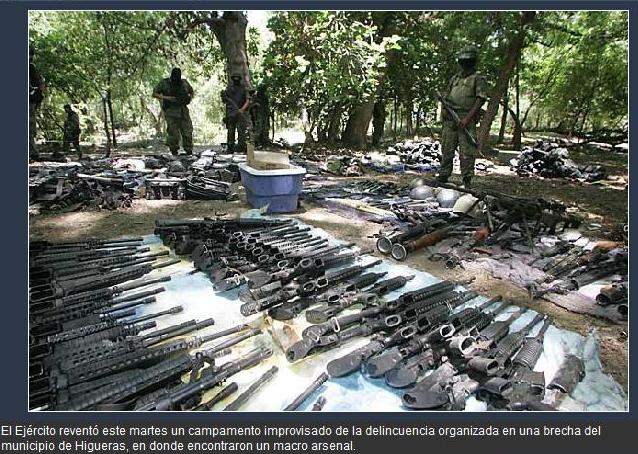 Not only weapons, but also vehicles believed to have been stolen were found at the site. 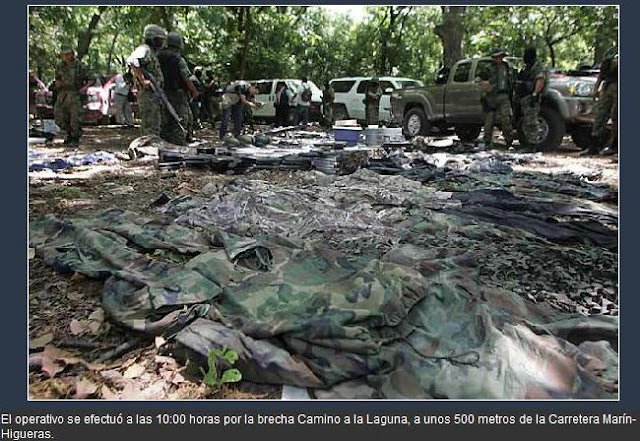 One smuggler was killed during the operation when he fired on the border patrol agents. 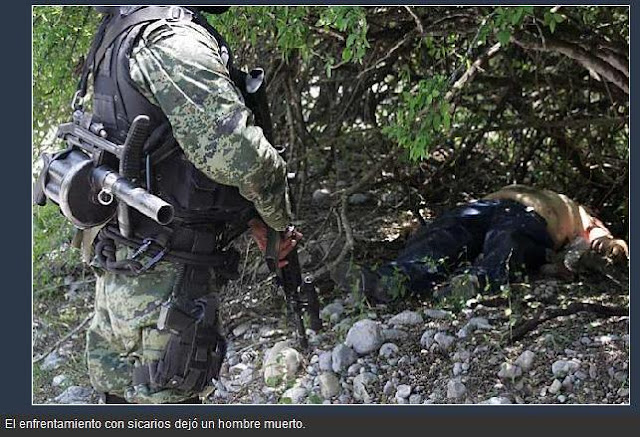 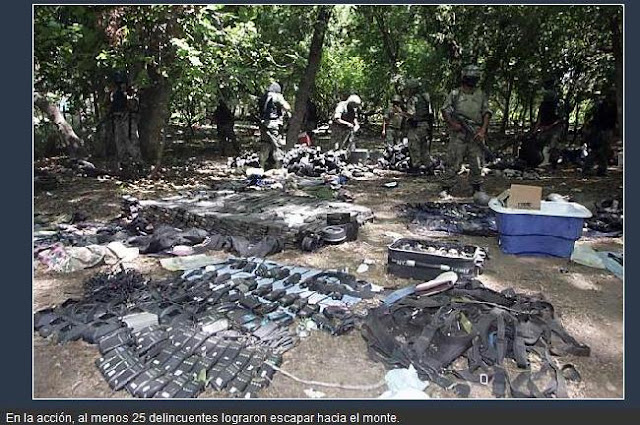 Arizona does not require a "Front" license plate! 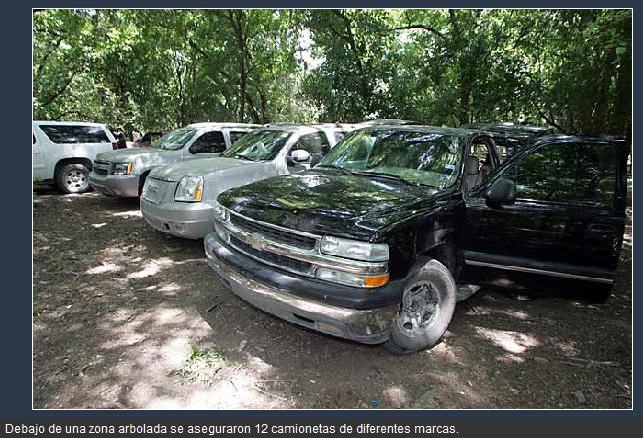 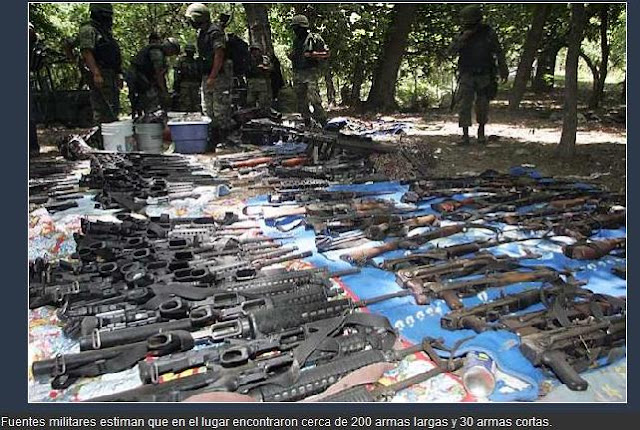 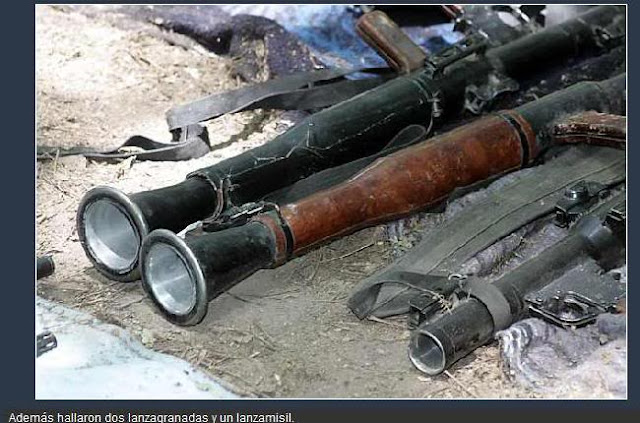 2 grenade launchers were among the cache 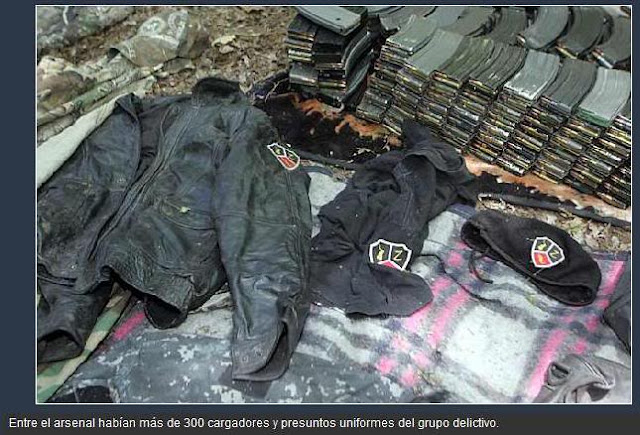 It appears these guys intended to portray themselves as police officers or military men. 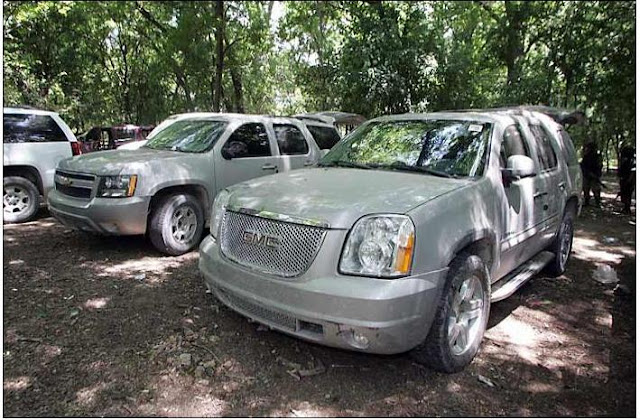 Each and every vehicle checked had been reported
Stolen in the USA in the recent past! $380,000 worth
Of stolen vehicles were recovered. 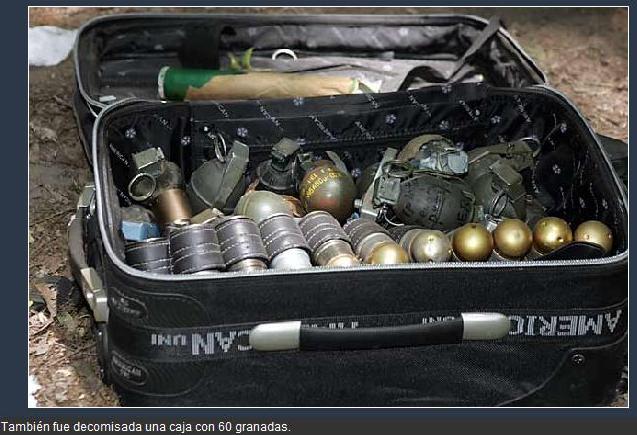 More than 60 grenades of varrying size were found
Arabic writing was found on them. 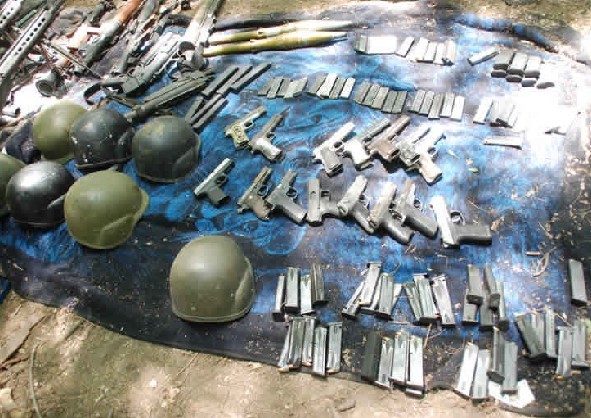 Numerous Hand guns with loaded clips were also found in the cache. 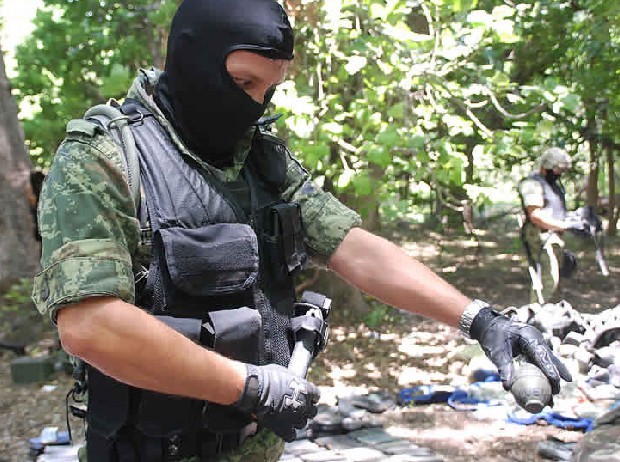 A single grenade like this could bring $5,000
On the streets of the USA . 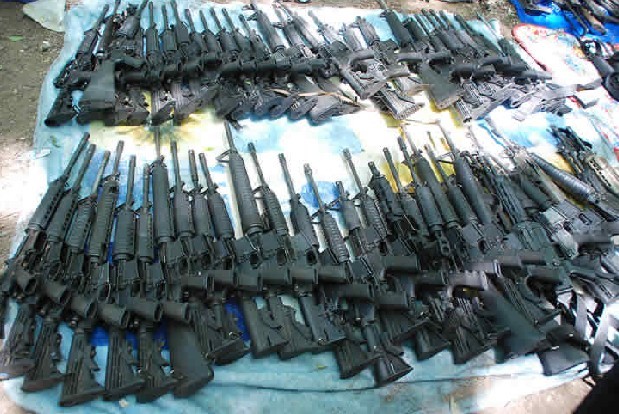 Each of these weapons could be sold for as much as
$5,000 on the black market in the USA . 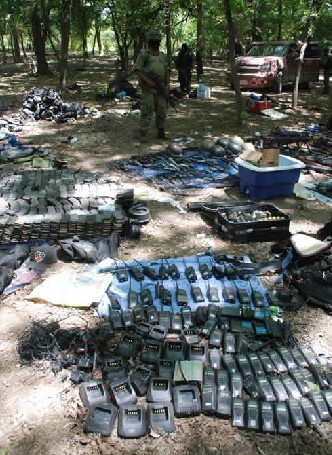 More than 80 stolen cell phones were found.
These could be used for detonating bombs remotely. 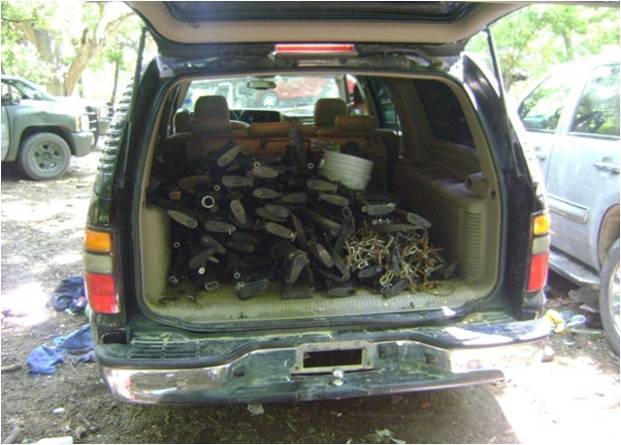 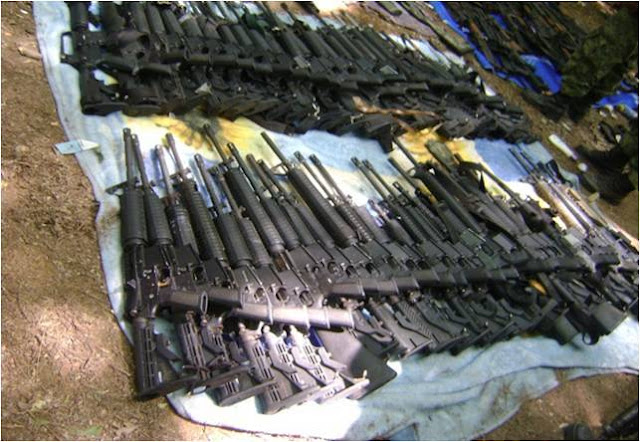 Clips loaded with live bullets were just too numerous to count 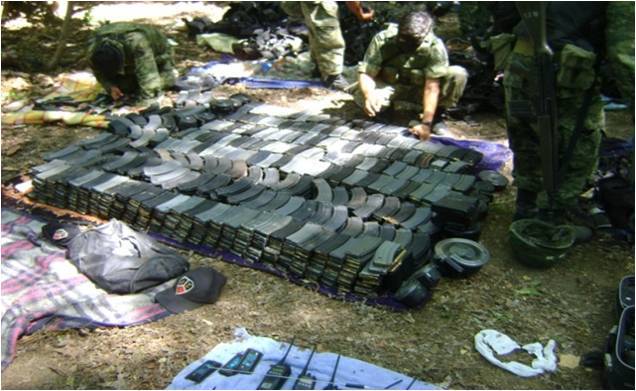 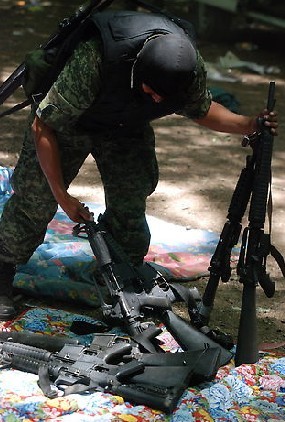 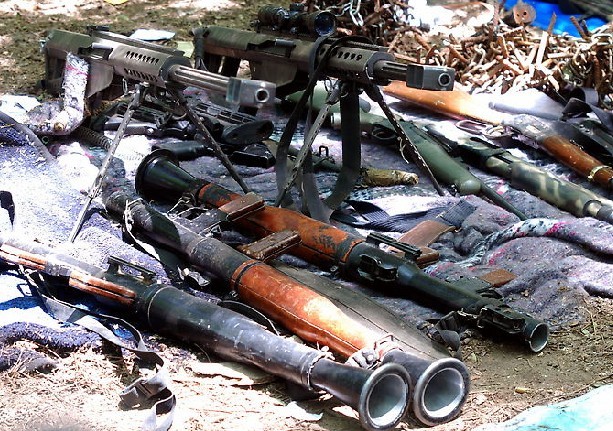 All types of weapons including Afghan - Russian - Chinese and many others
Why would  anyone to object to protecting our borders after they have seen this???
Our own Federal Government intends to sue Arizona over their law. But the Federal law reads almost word for word the same as Arizona 's. Problem is, the Federal Government refuses to enforce the law.
Sorta makes you wonder who our real enemies really are.................Doesn't it?
Email Post