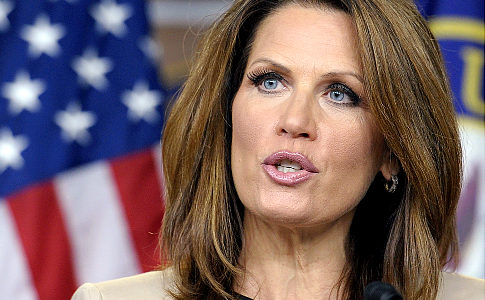 
Indeed, Michele in my opinion is probably the MOST principled along with Santorum of all of the Presidential wannabees.  THIS is the type of stance a President needs to make against one of the greatest threats to the U.S., Israel and the world since Adolf Hitler.

Kudos to Michele Bachmann for taking this principled stance against the most radical, misogynist, extreme ideology on the planet, the brutal Islamic law. I applaud her. She scores big on this issue as the other candidates are like little girls when it comes to this critical issue. She was also the only candidate to sign the anti-sharia pledge.
The two most overlooked candidates, Bachmann and Santorum, are head and shoulders above the field on the issues most critical to the nation and this historical juncture, foreign policy, Iran, Israel, national security and the economy, of course.
She bounces big with me on this.

Michele Bachmann said Wednesday she was troubled that American judges would cite sharia law in U.S. courtrooms and that the practice would “usurp” the U.S. Constitution.
“It’s very troubling to see some United States justices bring in sharia law,” Bachmann said in a radio interview with WHO Radio in Iowa. “Sharia law … certainly does not have a place in a United States courtroom, nor should it be followed by United States judges.”
Bachmann was responding to a question from a caller who asked the GOP hopeful’s opinion on judges “sneaking sharia law into courts.”
After a New Jersey judge cited the Muslim religious law in a 2010 decision, some conservative activists and politicians have taken a hard line against the idea of recognizing the practice in American courts and warned that the practice growing.
While some prominent Republicans, most notably New Jersey Gov. Chris Christie, have condemned the concerns as “crazy,” Bachmann and fellow presidential candidate Rick Santorum have taken firm positions against sharia.
In July, Bachmann became the first candidate to sign the Family Leader pro-marriage pledge that included language opposing sharia law.
“The only thing that United States judges should be bound by is the United States Constitution or state constitutions and the state and national laws of the land,” Bachmann said on the “Mickelson in the Morning” radio show.
Bachmann said judges who cite sharia “usurp” American laws and denigrate the Constitution.
“We surely must realize that [sharia] would be against our Constitution,” she said, “because that would usurp, and put sharia law over the Constitution, and that would be wrong.”
In 2010, a New Jersey family court judge cited sharia when he refused to grant a Muslim woman a restraining order against her ex-husband. Last month, a Florida appeals court upheld a lower court’s decision that litigants in a dispute over a mosque should look to their religious community, not the court, to settle their disagreement.
In the months since the New Jersey case, several states have introduced laws banning sharia law.