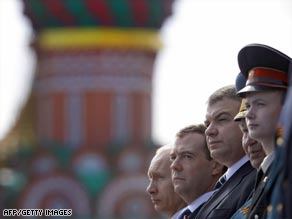 MOSCOW (Reuters) - Russia's Prime Minister Vladimir Putin said he wants to bring ex-Soviet states into a "Eurasian Union" in an article which outlined his first foreign policy initiative as he prepares to return to the Kremlin as the country's next president.
Putin said the new union would build on an existing Customs Union with Belarus and Kazakhstan which from next year will remove all barriers to trade, capital and labor movement between the three countries.
"We are not going to stop there and are setting an ambitious goal -- to achieve an even higher integration level in the Eurasian Union," Putin wrote in an article which will be published in Izvestia newspaper on October 4.
Putin said last month he would run in the March 2012 presidential election and his current public approval ratings show that he is set to win.
Putin's initiative comes as Russia nears the end of its 18-year-old negotiations to join the World Trade Organization. In the article Putin made no secret of his skepticism about the global trade watchdog.
"The process of finding new post-crisis global development models is moving forward with difficulty. For example, the Doha round (of international trade talks) has practically stopped. There are objective difficulties inside the WTO," he wrote.
In 2009, Putin threw Russia's bid to join the WTO into disarray, saying Russia would instead form the Customs Union with Belarus and Kazakhstan. The new initiative will have to be explained to WTO members.
WRONG CROSSROADS
Putin, who once called the collapse of the USSR in 1991 "the greatest geopolitical catastrophe of the 20th century," said his new project would not resemble the Soviet Union.
"It would be naive to attempt to restore or copy something from the past. However, a stronger integration on a new political and economic basis and a new system of values is an imperative of our era," Putin wrote.
Russia's relationship with its ex-Soviet neighbors has been troubled by trade and political disputes and even armed conflicts such as the 2008 war with Georgia.
Putin said he saw the new union as a supra-national body which would coordinate "economic and currency policy" between its members. It would also be open to new members.
Putin said that the Customs Union would expand to take in Central Asian republics of Kyrgyzstan and Tajikistan. He also made a veiled criticism of Ukraine which chose to stay outside the union citing its commitment to European integration.
Some of Russian's neighbors were unwilling to commit to integration because this appeared to contradict their decision to build ties with Europe.
But this was a wrong choice, he wrote. He argued that the Customs Union and in future the Eurasian Union would be the European Union's partner in talks over the creation of a common economic space, guaranteeing its members a stronger voice.
"Membership in the Eurasian Union, apart from direct economic benefits, will enable its members to integrate into Europe faster and from a much stronger position."
Putin wrote that he saw the way out of the global crisis through a regional integration, mentioning the European Union, Asia-Pacific Economic Cooperation, the North American Free Trade Agreement and the Association of Southeast Asian Nations as examples.
"These 'bricks' can assemble into a more stable global economy," Putin wrote.
Email Post