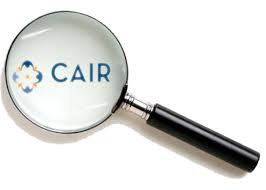 This just went out in the "American Muslim News Briefs" email from the Hamas-linked Council on American-Islamic Relations (CAIR):


CAIR: Al-Awlaki's Calls to Violence Rejected by U.S. Muslims Civil rights group concerned about constitutional issues raised by assassination of American citizen (WASHINGTON, D.C., 9/30/11) -- A prominent national Muslim civil rights and advocacy organization today reiterated that the calls to violence made by Anwar al-Awlaki, who has reportedly been killed in a U.S. drone strike in Yemen, have been firmly rejected by American Muslims.
In a statement reacting to al-Awlaki's death, the Washington-based Council on American-Islamic Relations (CAIR) said:
"As we have stated repeatedly in the past, the American Muslim community firmly repudiated Anwar al-Awlaki's incitement to violence, which occurred after he left the United States. While a voice of hate has been eliminated, we urge our nation's leaders to address the constitutional issues raised by the assassination of American citizens without due process of law." [MEDIA NOTE: Because of the sensitivity of the issue, please use the statement in full.]...

You got it, Ibe. But once again Hamas-linked CAIR reveals its true colors. It denounces al-Awlaki as a "voice of hate" (note that that is the same language it uses of anti-jihadists who, unlike al-Awlaki, never conspired with anyone to commit mass murder or approved of any kind of violence), but is "concerned" that "constitutional issues" have been "raised by the assassination of American citizens without due process of law."
Anwar al-Awlaki was an American citizen, yes. He was also a traitor. He was waging war against his native country. He was an enemy combatant. If an American citizen had gone to Germany and joined the Wehrmacht in 1942, and was killed in battle against American forces, would anyone have been raising "constitutional issues" over the killing?
Hamas-linked CAIR: this century's German-American Bund.
UPDATE: Jihad Watch reader Axel points out Hamas-linked CAIR's use of the word "assassination," which implies moral culpability on the part of those who did the killing. Enemy combatants are not "assassinated." Unless, of course, one does not consider them the enemy.